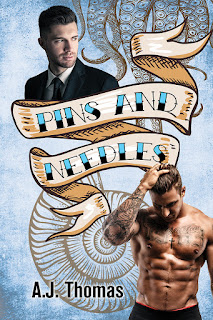 Listening to Sean's pulse race in time with his, Nate realized that he wanted so much more than a single orgasm, he wanted to hold Sean in his arms and stay wrapped around him forever. He wasn't sure when or how Sean had become so essential to him, but Nate didn't know if he would ever be able to let him go.


Pins and Needles is my first ever A.J. Thomas read and now I realize--very much belatedly--exactly what I've been missing. This novel is one of the very best I've read so far this year, and when I say that, I mean it's already in the running for my year-end list of top reads for 2017. This romantic suspense tale of true love, trust, and treachery interspersed with the quest for justice in an incident that took the leg of one young man and the deeper meaning of art etched into one's skin. Layered with tension, Nate Delaney and Sean Wilkinson's story kept me up till the wee hours of the morning, but then that's what happens when you start a book past midnight and discover all to quickly how improbable the notion of even putting your e-reader down for a minute is. It's an absolute must-read.

Even at twenty-eight and after having won a case that those more senior advised was best settled rather than taken to trial, Nathan Delaney hopes for his father's acknowledgment. When his efforts are made to look like something else and he's reprimanded rather than appreciated, Nate makes a snap decision that has him walking away from his father's law practice and straight into an intriguing case involving twenty-two-year-old seaman Sean Wilkinson. It's far from a simple case, what with Sean's relationship with the ship's captain is used against him and when something he invented is being taken away from him in exchange for a cash settlement. But things become even more complicated when Nate finds himself tempted to cross a line he knows all too well he shouldn't with his client. With his career on the line, Nate learns that two other things are now at risk, too--his heart and Sean's life.

I can't say enough good things about this book. The romance spoke to my heart and the suspense appealed to the more cerebral side of me. The writing was crisp and on-point, with dialogue that wasn't dumbed down, making me believe that the author doesn't underestimate her audience in the least. The elements of mystery and suspense were top-notch, with me wondering what really was going on and who was behind it all. Then, of course, there's the love story, and it was both sweet and steamy, progressing in a realistic manner, as Nate and Sean went from strangers to attorney and client to two men wanting more but unsure of how to go about it to partners falling in love. There's a pinch of angst coming from Nate's family situation as well as emanating from Sean's personal history, but it's not a case of drama for the sake of drama. Nothing about this book feels wasted, and if it seems like I'm gushing, well, maybe I am because Pins and Needles surpassed any and all of my expectations. Five-plus stars. ♥