Review: Out of the Shadows by K.C. Wells 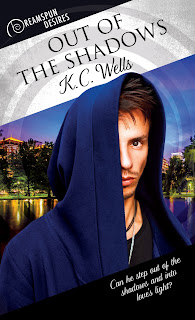 Out of the Shadows is author K.C. Wells latest book in Dreamspinner Press's Dreamspun Desires line, and once again, Wells has left me satisfied. When I originally read the synopsis for this book, I thought it was going to be far darker than it actually turned out to be, which was a pleasant surprise! This was a feel-good love story that had that Beauty and the Beast touch of inspiration to it. Thirty-two-year-old Christian Hernandez is the "beast", scarred by a freak accident eight years prior, he chooses to stay within the confines of his apartment. On the rare occasions he has no choice but to go out, he makes sure no one can even glimpse his appearance. When he's informed by the HOA of his apartment building that all residences will be refurbished, Christian has nowhere to go. Stuck in his bedroom, he hopes he'll be able to stay there while the guy tasked to work on his apartment is around. Except circumstances has him coming into contact with twenty-five-year-old Josh Wendell, who he's been crushing on for awhile. Will Josh react the way Christian expects him to or will Josh be able to entice Christian out of the shadows?

This was a lighthearted read, one that put a smile on my face by the time I was done with it. As expected, Christian had issues with how he looked. While he wasn't as macabre as he saw himself, there was good reason why he was self-conscious and afraid of the looks he would get from other people. It's a sad reality that we're often judged by the way we look. But Josh was such a dear, and how I wish there were more individuals like him in real life. He noticed the scars, but he was the kind of person who saw beyond the outside and focused on what matter most--what lay inside Christian. I liked the progression of the relationship between these two men. Nothing was rushed nor forced, and they did forge a friendship before anything romantic came into play. Aside from Josh and Christian, though, Josh's friends were an unforgettable trio, and there were hints about two in particular. So, now I'm left wondering--and hoping--that we'll get to see what happens to all three of those guys in the future. It's all K.C. Wells's fault for planting the seed and for writing such a great love story. I am giving Out of the Shadows five stars. ♥

Purchase Out of the Shadows on Dreamspinner Press | Amazon | B&N | iBooks | Kobo.