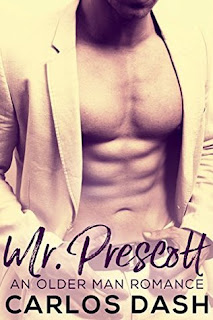 Note: This ARC was provided by the author via Xpresso Book Tours in exchange for an honest review.

Mr. Prescott is a May-December novella written by Carlos Dash about the thirty-eight-year-old new mayor of London and a twenty-one-year-old college student working in a bookstore in New York. Nathan Prescott has made his way across the pond at the invitation of his New York counterpart. He expects his time in one of the most famous cities in the world to be filled with meetings, but Nathan hopes to be able to check out a few of the sights. When he passes a bookstore during one of his walks about town, he decides to step in to find a book he's been wanting to read. What he finds instead is a young woman named Nicole, and she's about to change his life forever.

Because this story's title is eponymous to the main male character, my expectations were high with as far as his appeal was concerned, and well, that's where this book faltered. Nathan Prescott said he didn't normally flaunt or take advantage of his position, but he sure as heck didn't seem to have any qualms about doing either. It's like when you say "I'm not a douche," but then everything you do begs to differ. In terms of the story itself, it was okay, though I'm cynical when it comes to just how long this thing between Nathan and Nicole is going to last. A love match this was not, but as far as readability, Mr. Prescott was good enough for me to give it three out of five stars. ♥