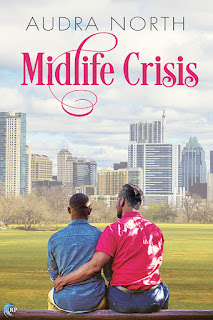 I've read a few of Audra North's M/F romances before, and I was pleasantly surprised when I found out she had an M/M romance in the offing with Riptide Publishing. Midlife Crisis is the story of fifty-four-year-old Cam McGhee, a widower who decides to take a break from life as he knows it to explore a part of himself he's denied for what feels like forever. He leaves his hometown of Bitter, Texas--if only for a few months--and checks out the sights and sounds of Austin. While his first foray into a gay club may not have turned out the way he expected it to, Cam notices the fifty-something guy with the biking gear in a café and it's clear that Dave Montoya has noticed him to, the attraction palpable and very much mutual. He never expected to fall in love while in Austin, but when his children learn his secret, Cam will have to choose between life in Bitter or the possibility of life with Dave in Austin.

Well, I've read my fair share of coming out stories, and Cam's story is probably the one that involves the oldest main character so far. He may be fifty-four but his life experiences have been limited to his town of Bitter (which is a rather apt name for a place that is set in its very conservative ways). He's denied his sexuality for his entire lifetime, especially after he marries because he refused to cheat on his wife. It's only nearly a year after her passing that he even finally decides to see what the rest of the world has to offer--the rest of the world being a big city in the same state. There's an innocence to him that often trips into naivete, and while that allows Cam to have a certain sheen to him, it gets to the point where he simply comes off as tarnished by all his years of hiding and self-denial, inwardly tired of all the expectations and demands of the people he surrounded himself with over in Bitter.

Cam's self-imposed deprivation of his emotional and sexual needs is slowly--and painfully--told in flashbacks which highlight all the supposed sacrifices he's made. Yeah, some of those sacrifices may have been for his wife and then later for his two children, but in the end, Cam was too afraid to be open and honest about who he was, not even choosing instead to leave his hometown and go somewhere more gay-friendly. He had no one to blame but himself and that definitely didn't make him more endearing as a main character. Again, that sheen was leaving him far more rusted out than anything else. I did like Dave and I think Elijah, Cam's son, was far more likable than his sister. My favorite part of the book had to be the one involving Roger Henderson and I was just happy with how his life turned out. Midlife Crisis had a couple of highs but several more of the lows, making it a middling 3.5-starred read. ♥