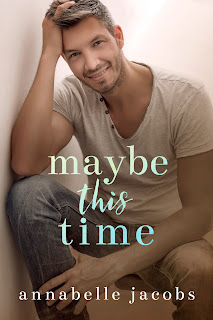 Annabelle Jacobs is back with a rather fun and lighthearted read! Maybe This Time is the story of thirty-year-old Ryan Blackwell who moves into a new apartment and finds himself curious about his new--and oh-so-hot--neighbor. Thirty-eight-year-old Matthew Thomas isn't exactly rolling out the welcome mat nor offering up goodies to make Ryan feel at home, but maybe that's because Matt hasn't failed to notice Ryan either. Matt isn't in the market for any sort of commitment, choosing one-time hook-ups, and as attracted as he is to Ryan, having the guy living in the same building could cause some awkwardness should they, indeed, sleep together. Some temptations, however, are far more difficult to resist than others. When a hook-up has Matt suggesting a friends-with-benefits thing, Ryan goes with it, but what happens when the guy who doesn't believe in relationships decides that he kinda-sorta-maybe wants one and the guy who wanted it to begin with suddenly isn't sure he wants it anymore?

If there are kissing cousins, then maybe Ryan and Matt are necking neighbors? Yes? No? I thought I'd throw it out there. Anyway, these two were an interesting couple. From their personalities to their views on relationships, they seemed to be opposites. I wasn't really a fan of Matt's in the beginning, not with his less than welcoming nature. I mean, I'm not exactly the world's warmest person either, but I do offer up a smile when it's merited. But he did prove to be a good guy of sorts as the story went on. Ryan, on the other hand, was great, as was his circle of friends. I think he helped to loosen Matt up, and they did become both friends and lovers, even as they tried to make sure that it was clear they were just friends with bennies. I really liked the change in positions these two had when it came to being in a relationship later on in the book. I loved the character development in this one and the fact that it left me a happy reader was tops. As always, Annabelle Jacobs satisfies! Four stars for Maybe This Time. ♥

Purchase Maybe This Time on Amazon.