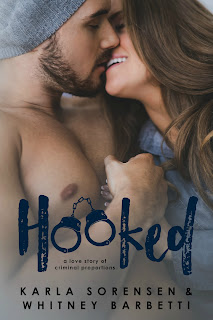 Twenty-three-year-old Lucille Connors and twenty-six-year-old Xavier Lockwood are a mismatch made in...well, a court-mandated support group. She's a former drug addict and dealer and not-quite-reformed kleptomaniac and he's a wealthy recluse who doesn't really socialize with...well, anyone. From the moment they take note of one another during a meeting, Lucy can't help but goad him and X can't help but react. Wanting to be together shouldn't make much sense, but there's something about the other that calls to each of them. "Trouble" is written all over this twosome, but once they've got one another hooked, being together is an addiction neither can shake.

I've read several of Whitney Barbetti's books in the past, and if I remember right, I've read one of Karla Sorensen's, but none of those had that romantic comedic feel that this collaboration of theirs had. Hooked was a fun read, one that had two of the quirkiest individuals to ever be thrown together in a romance novel, at least in my experience. As individuals, X and Lucy have their share of issues, so you can imagine how complicated things get once they do get together, even better they start to fall one another. These two have walls that have been fortified over the years, but of course it would have to take someone as extraordinary as X to break down Lucy's walls and vice-versa.

This book is probably one of the more unique reads I've come across so far this year. Both X and Lucy are far from the norm in terms of couples but that's part of what made this as memorable as it was. I also need to give kudos to both authors because I wasn't able to tell who wrote what, although I admit that I have more experience with Barbetti's writing than Sorensen's. These two came up with a fun love story that had a dash of angst thrown in and it all blended together into what had my attention for a good two or so hours. Once I was hooked on Hooked--pun absolutely intended!--there was no turning away. It gets four stars, and here's to more from this new writing duo. ♥