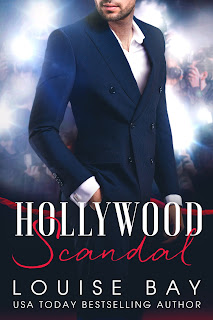 Hollywoood Scandal is a famous person-regular person romance with a whole lot of fake relationship thrown in. Penned by Louise Bay, this is my second read from the author and while the first one was a pretty good read (though I confess it didn't necessarily meet the high expectations I had set given what I'd read about the author's writing on Goodreads), her latest release faltered. Maybe it's because I'm reaching my saturation point with as far as fake relationship story lines are concerned. After all, they all end the same way--fake becomes real. So, it become all about the journey the couple goes on in getting from point A to point B. How will the author make their book stand out in a sea of so many others that carry the same basic story line? This isn't the first fake celebrity romance I've come across either, so I was looking for that extra...something. Unfortunately, I wasn't able to find it.

Matt Easton is a Hollywood actor with a less than stellar reputation that he's ordered to keep as squeaky clean and all spiffy and shiny if he wants to go from plain ol' star to superstar. He's got a strong fan base, but clearly, Lana Kelly isn't a fan. She has no clue who he is, but then this lack of knowledge doesn't matter much to her. She's pretty much happy with how her life is going in her small town. This simple girl from a simple town becomes Matt's answer to his reconstructed reputation. Being seen as the good guy with a steady girlfriend will benefit him more than being the bad boy with a bevy of bimbos. She agrees to his plan and they go into it knowing full well it's all fake. The attraction is clearly there and it's mutual. As their feelings become all too real, will the small-town girl who likes her life the way it is risk it all to be with the famous guy she loves under the glaring lights of Hollywood?

Let's go first with what I did like about this book. Matt and Lana were easy enough to like as main characters. They weren't terrible people who thought they were God's gift to, well, each other. There was a sincerity there that I liked and appreciated, and while the connection between wasn't of the sizzling sort, there was enough chemistry there for me to enjoy the romance in general. But as much as those were well and good, this lacked that spark of creativity that I was hoping I would find. I wanted something different to be added to the familiar fake relationship story line, something unique that would make me think "Ooh! That's a first!" Sadly, it simply wasn't there. This is not me saying that the book sucked. It didn't. It was okay and was even rather good at certain points. I was just in the market for something that surpassed "okay". So, I'm giving Hollywood Scandal my rating for "okay": three stars. ♥