Review: Hate to Love You by Tijan 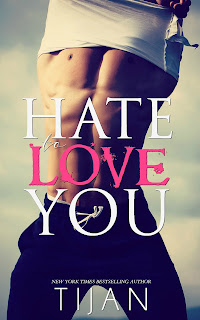 Ah, that thin line between love and hate can lead to both wondrous things and things that could leave you deeply wounded. Bestselling author Tijan knows how to write a story that'll tug at your heartstrings while pushing at the boundaries of more than a few readers who prefer their romances with hearts and flowers and all the niceties and neatness that are often found in fairy tales and not so much in real life. With her latest standalone release (one that has potential to spawn spin-offs thanks to a memorable number of supporting characters), Hate to Love You, she explores what it's like to have a set of rules one hopes to live by as well as a bunch of assumptions and preconceived notions and to have each one of the former broken and the latter corrected when the person you pegged as all wrong for you turns out to be the right one. There's nothing quite like life as a young college student!

Shay Coleman is everything Kennedy Clarke has sworn to stay away from. He's the kind of guy who has a reputation and is seen by the rest of their peers as some sort of god. Maybe he is in some aspects, but Kennedy has no intention of being anywhere within the guy's vicinity if possible. But from their first encounter in the class they share together, Kennedy realizes avoiding Shay is more difficult than she had hoped it would be. Even as she makes it clearer than day that she wants nothing to do with him, she doesn't expect her less than friendly reception to both challenge and intrigue Shay. There's something about Kennedy that makes Shay want to get to know the girl behind the thick walls. Beyond the animosity and attraction are two young people who could very well defy the odds that they set for themselves, one another, and others, if only they're able to see past the hate.

I may have yet to read everything on this author's back list, but what I have read--the Carter Reed duet and Anti-Stepbrother--left me knowing full well that I'm going to have to make time to read whatever else is still waiting on my to-be-read list. With Hate to Love You, I was able to have a ringside seat to the far from easygoing road to romance that Shay and Kennedy were on. The road was rocky, but it was far from boring, what with these two giving as good as they took, and I saw them take steps forward and back, until they were finally in the same place at the same time. Kennedy is a girl who pushes past the limitations she has set as well as those others have put in place for her, and Shay was simply so much more than I was hoping he would be. These two, along with several other characters, made Hate to Love You one of the better new adult (NA) reads I've come across. It gets 4.5 stars. ♥

Purchase Hate to Love You on Amazon.