Review: As Big as the Sky by Amy Aislin 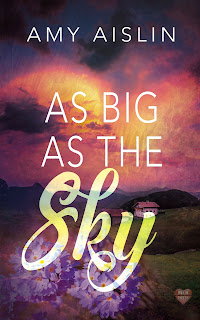 Ah, I do love a novella that gives me almost everything that I want without me having to spend hours upon hours to get even a smidgen. Amy Aislin's As Big as the Sky is a novella that tells the enemies-to-lovers story of twenty-seven-year-old graphic designer Sam McAuley and twenty-four-year-old bookstore assistant manager Bo Novak. Bo is spending four months at his older sister's home which also houses an animal rehab center. Chasing after chickens that run across the fence that separates his sister's property from that of her neighbor's is made even more taxing by the man renting the home--Sam--who makes his displeasure at the noise and other disturbances known to Bo on a regular basis. But when Sam overhears a one-sided conversation Bo has with a pig, Sam starts to see the young man labeled by his own sister as a flake with new eyes. It's the beginning of a deeper appreciation for Bo as well as a brand new friendship--one that could lead to far more if Sam and Bo give themselves a chance.

This was a truly adorable read, with an idyllic setting and two main characters who were so darn likable. Okay, maybe it took a tiny bit longer for me to like Sam compared to Bo, since his likability was a given, but once I saw the Sam who didn't spend all his time pointing out all of Bo's supposed failings watching over the animals, he had two thumbs up for Bo's significant other. While they didn't start off on the right foot, these two did become quite close once they got over the initial hurdle and then they fell straight into love soon after. So, in terms of how quickly everything happens, yes, it may feel like insta-love, but I wouldn't necessarily label it as such. Did everything happen faster than you may think? To a degree, but this is a novella, so it's a much shorter read, so the fast pace isn't a shock. The fact that a lot of story--enemies to friends to lovers and then family issues on Bo's end--does take place regardless of it being a novella, and that I seriously adored Bo and Sam and how everything evolved between them as a couple and for them as individuals, makes As Big as the Sky a 4.5-starred winner to me. ♥

Purchase As Big as the Sky on Amazon.