Review: After Our Kiss by Nora Flite 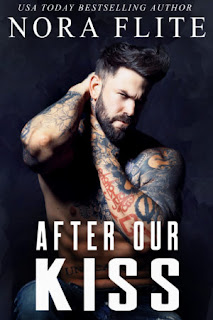 Georgia Mary King was only thirteen when she was kidnapped by Facile Adams. Held against her will, Georgia found an ally in Conway, Facile's then-fourteen-year-old son. It was Conway that kept her sane those weeks she was kept on lockdown--it was he who gave Georgia her first kiss and then helped her escape. A decade later, Georgia's life continues to move forward, but all it takes is being in the wrong place at the wrong time. She finds herself in a situation that requires her being rescued, and her rescuer has a familiar face, with lips that were once against her own ten years ago. But Conway proves straightaway that he isn't Georgia's hero. He abducts her and makes it clear that he isn't the boy he once was. No, this time around, he intends to finish what his father started.

After Our Kiss is a dark romance--heavy on the dark, light on the romance--penned by Nora Flite. Georgia and Conway are teens when they first meet, thrown together in dire circumstances. When they meet again, they're adults, but Conway is clearly the more damaged one between the two, considering that he's kinda-sorta-maybe become what his father has always wanted him to be. For the record, there isn't outright rape in the story. HOWEVER, Georgia is put in a situation as an adult where her only option is to be given sexual gratification by her kidnapper, aka Conway. The line may be blurry, but it's still there. Maybe some will chalk that up as part of the whole "dark romance" thing, but it is, for all intents and purposes just dark. There is absolutely nothing romantic about being made to watch porn and touched in order to be aroused and then beg for your sexual release. Period.

The "romance" part was iffy for me at times, but I confess that there were three particular shockers in this story that came one after the other that called to the mystery suspense fan in me. I certainly didn't see any of those coming and when they did, well, hello, color me surprised and in a good way. While the first time Georgia was kidnapped had her more or less stuck in that one place where she was trapped, there was more action the second time around. We also had a more resourceful Georgia, so kudos to her for fighting back and knowing--even with Conway-induced orgasms--that this was a situation she didn't want to stay in. I do wonder why Conway didn't know one secret that was kept from him since there's procedure for it, but oh well. After Our Kiss gets three stars. ♥

Purchase After Our Kiss on Amazon.