Book Spotlight: So I Married a Sorcerer by Kerrelyn Sparks 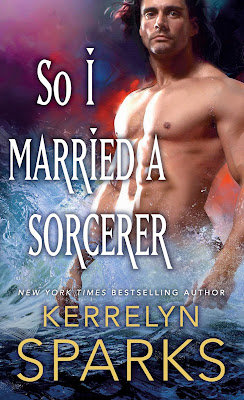 So I Married a Sorcerer
(The Embraced #2)
by Kerrelyn Sparks
Release Date: August 29, 2017
St. Martin's Press

About So I Married a Sorcerer
Growing up on the Isle of Moon, Brigitta knows nothing of her past, except that she is Embraced: born with powers that forced her into hiding. Everything changes when she learns she’s a princess, hidden away from her villainous half-brother who now rules the kingdom. But he knows about Brigitta, and he’ll do anything to get her back. Unless a certain roguish pirate has anything to say about it.

Rupert is both an infamous pirate and a sorcerer with the power to harness the wind. He's been waiting nineteen years for revenge—and he needs Brigitta to get it. What begins as a kidnapping of the fiery beauty turns into a fierce attraction. But can he win the captive princess's heart? 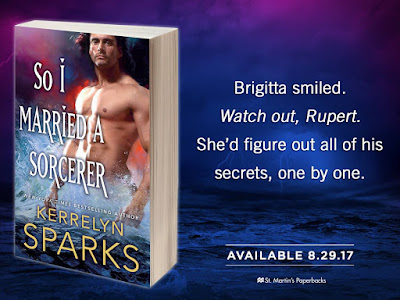 Add So I Married a Sorcerer on Goodreads. 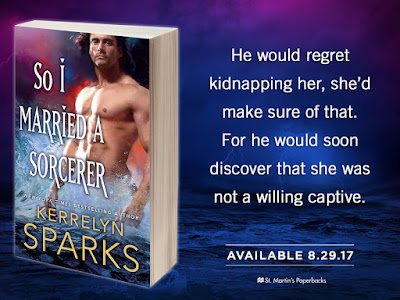 An Excerpt from So I Married a Sorcerer
“I cannot play,” Brigitta told her sisters as she cast a wary look at the linen bag filled with Telling Stones. Quickly she shifted on the window seat to gaze at the Great West- ern Ocean. The rolling waves went on for as far as she could see, but her mind was elsewhere. Calm yerself. The prediction will ne’er happen.

At dawn they had boarded this ship, accompanied by Mother Ginessa and Sister Fallyn, who were now resting in the cabin next door. This was the smallest vessel in the Eberoni Royal Navy, the captain had explained, sturdy enough to cross the ocean, but small enough to travel up the Ebe River to the palace at Ebton. There, they would see their oldest sister, who was now the queen of Eberon.

According to the captain, Queen Luciana had intended to send more than one ship to safeguard their journey, but at the last minute the other naval ships had been diverted south to fight the Tourinian pirates who were raiding villages along the Eberoni shore. But not to worry, the cap- tain had assured Brigitta and her companions. Since the royal navy was keeping the pirates occupied to the south, their crossing would be perfectly safe.

Indeed, after a few hours, it seemed perfectly boring. “If we don’t play, how will we pass the time?” Gwennore asked from her seat at the round table. “ ’Twill be close to sunset afore we reach Ebton.”

“I wish we could wander about on deck,” Maeve grumbled from her chair next to Gwennore. “ ’Tis a lovely spring day, and we’re stuck down here.”

Sorcha huffed in annoyance as she paced about the cabin. “Mother Ginessa insisted we remain here. I swear she acts as if she’s afraid to let anyone see us.”

“Perhaps she fears for our safety because we are Em- braced,” Gwennore said.

But only in Eberon, Brigitta thought as she studied the deep-blue waves. Being Embraced was a death sentence anywhere else on the mainland. The other kings abhorred the fact that each of the Embraced possessed some sort of magical power that the kings, themselves, could never have.

When Brigitta and her adopted sisters were born, the only safe haven had been the Isle of Moon. They’d grown up there in the Convent of the Two Moons, believing they were orphans. But almost a year ago, they’d discovered a shocking truth. Luciana had never been an orphan.

Since then, Brigitta had wondered if she had family somewhere, too. Had they hidden her away or, worse, abandoned her? She feared it was the latter. For in all her nineteen years of life, no one from the mainland had ever bothered to contact her.

You are loved, she reminded herself. She’d grown up in a loving home at the convent. Her sisters loved her, and she loved them. That was enough.

It had to be enough. Didn’t it? 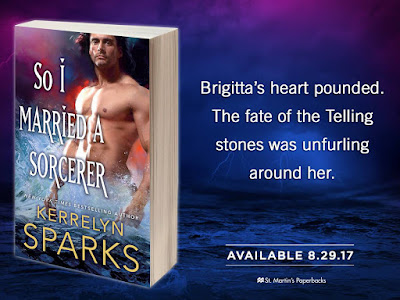 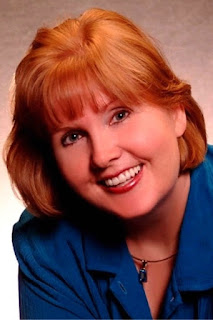 Apparently, she has issues with reality. After writing 16 books about vampires and shifters, Kerrelyn Sparks has now completely gone off the deep end and wound up on another planet.

Although Kerrelyn is best known (so far) for the Love at Stake series, which has hit as high as number 5 on the New York Times list and 22 on the USA Today list, she hopes her readers will love The Embraced as much as they did her merry band of vamps and shifters.

Kerrelyn lives with her family in the Greater Houston area of Texas.