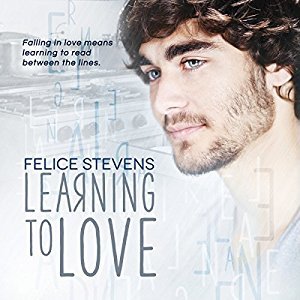 Learning to Love was the first Felice Stevens novel I had ever read. Because I have this weird habit of usually--though not always--listening to audiobooks of stories I've already read in the past, I'm often curious to see if my feelings about the story will change because of the change in medium. The story centers on Gideon Marks, a man who was often made to feel as if he wouldn't amount to much due to his sexuality and his dyslexia. A great deal of the rejection he experienced was courtesy of his alcoholic of a father, what with Gideon having lost his mother who was his greatest source of support, understanding, and acceptance. After graduating from high school, Gideon upped and left, not wanting to surround himself with people who looked at him and found him wanting. A decade later, however, he's back in New York and wants to show that he's not the failure they thought he'd be. One of those who welcomes him back is Jacob Fine, someone Gideon believed thought little of him. Gideon's about to learn a thing or two about the son of a rabbi who's always seen him as special, and maybe, even learn about love.

I wouldn't necessarily classify this as a second chance love story, not with Gideon and Jacob not being anything more than people who knew each other growing up but not really having any sort of relationship, whether platonic or romantic. No, this was more of a first chance romance. Maybe it took these two men those ten years to truly grow up and come into their own. There are secrets that are revealed between them, and a number of assumptions and preconceived notions are cleared up although Gideon and Jacob had quite a few challenges that they had to confront if there was any hope for them to be in the kind of relationship that they both deserved to have. When I originally read the book, I did feel that the intensity and speed in which they fell for each other came off as too quick and too soon, but more than a year later, I guess I'm seeing--or well, hearing--their story from a fresher perspective, and so my appreciation for it has changed. it was as if fate were telling them both "FINALLY!" because if any two people should be on their way to a happily-ever-after, it was these two AND with one another.

This was the first time I'd listened to an audiobook with Derrick McClain as the narrator, and boy, did he impress me. I don't know what it was, but when I "heard" Gideon and Jacob in my head while reading the book, they sounded a certain way. Lo and behold, McClain literally gave them their voices and they were pitch perfect. I liked that Gideon's voice was distinct from that of Jacob's. Admittedly, I liked the latter's more than the former's, and it had a lot to do with Gideon sounding a tiny bit whiny at times. But McClain did a fantastic job--yes, even those whiny-sounding thoughts that Gideon had going--narrating Felice Stevens's work. He breathed new life into this and while I liked the book when I read it in May 2016, I loved it even more now. Stevens knows how to write heartrending stories that always have those happy endings that we all wish were as guaranteed in real life. Learning to Love is my second audiobook from Stevens and I wouldn't hesitate to listen to even more in the future. Hopefully, she and McClain will team up once again because her words and his voice work well together. 4.5 stars. ♥