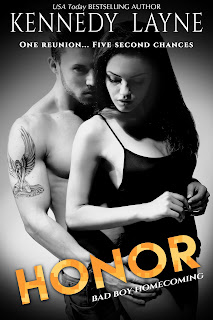 The Kennedy Layne-penned romantic suspense novella Honor is the fourth in the multi-authored Bad Boy Homecoming series. Derek Spencer and Tessa Daniels were friends in high school, part of the same circle of friends, but in the ten years since graduation, they never really bothered to keep in touch. Ten years later, Derek's back in Catfish Creek, just in time for their high school reunion. Only, Derek's decision to avail of his emergency leave has more to do with being with his parents after his father's health scare and not his desire to be around his former peers. His mother has other plans though, playing matchmaker by insisting Derek accompany his old friend Tessa to the very reunion neither one of them wants to go to. Things between them get hot and heavy, but Derek and Tessa are aware that Derek will have to return to Afghanistan to finish out the rest of his tour as a Marine. Neither one of them had planned to fall for each other in a short amount of time, but when Tessa's stalker decides to make one last stand and makes the threats reality, Tessa and Derek's resolve to keep things casual will be tested.

I really liked the mystery and suspense elements of this book! When Tessa's stalker was revealed, I confess that I was gobsmacked because I never would have guessed they were capable of doing what they did. My attention and suspicion were focused on someone else completely, so kudos to the author for pulling the wool over my eyes. Now, as far as the romance is concerned, well, it took me a bit longer than I expected to be fully on board with the idea that there was actual chemistry between Derek and Tessa. I understand the whole idea of being friends with someone in high school but not keeping in touch with them afterwards. Been there, done that. And there was the expected awkwardness but the flirtation and more intimate interaction felt a bit forced in the beginning. By the time I got to the halfway point, I did warm up to these two main characters as a couple and the second half of the book was really good, though the ending felt rushed. This was my first ever Kennedy Layne read and while it wasn't my favorite among the Bad Boy Homecoming books, it still flowed well with the rest of the books. It gets 3.5 stars. ♥