Review: Beneath These Shadows by Meghan March (Beneath #6) 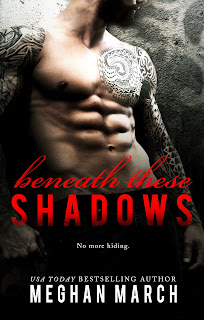 Beneath These Shadows is the sixth novel in one of my favorite ongoing series, Beneath, and bestselling author Meghan March has once again spun a tale  that's guaranteed to get alpha-loving hearts a-flutter. This also happens to be a crossover story, and those familiar with the Meghan's two Dirty series--the Dirty Billionaire trilogy and the Dirty Girl duet--will recognize mob boss Dominic Casso, who appears to have been busy sowing his seeds with readers having met two of his illegitimate children, half-brothers Creighton Karas and Cavanaugh Westman. Here, we meet Eden Mathews, Dom's illegitimate daughter. She's been sheltered all her life, living within the confines set by her father, but when Dom's criminal enterprise is put under a microscope and investigated, Eden is sent away. She's always wanted to travel beyond her home state of New York. The place she chooses to go to? New Orleans, and there she meets a broody tattoo artist who makes her crave more than the sudden freedom she's been given.

Bishop--whose last name has never been mentioned since he first appeared in Beneath These Chains but his existence has been hinted at since the series starter, Beneath This Mask, as Delilah's brother and a talented tattoo artist--has never stayed in one place permanently, a situation that's been existence for several years. Even though his sister lives in New Orleans, he'll be rather to move on if trouble comes a-calling. He's thirty-three, quiet, and has been known to get any girl he wants, but he's never been with them more than once. When he spots a young woman who stands out for all the wrong--and right--reasons. She's clearly new to the city and as much as Bishop has tended to keep his distance and not get involved in the business of others, he finds himself rescuing her more than once. Eden has sparked something within him that he's never encountered or experienced with anyone else. She makes him want to set down roots, but can he convince her to want the same things with someone like him?

Okay, I admit that when a sixth book was mentioned, I was hoping it would finally be Rhett Hennessy's, but when the announcement came that it wouldn't be his, I was still curious to find out who the main characters would be. Bishop has been a minor recurring character since book three, and you know how it is with those silent types--they tend to pique one's curiosity. He obviously has a storied past, what with his need to not stay in one place longer than necessary. Him constantly ambling his way to Eden's rescue made it obvious that he was more into her than he probably wanted to admit to himself, and they did make for an interesting pair. While I liked the romance and the mystery suspense aspects, the appearance of all the couples plus familiar supporting characters like Delilah--she is Bishop's sister, after all--and JP in the first five novels was the thing I liked most...and least. It just felt as if this were all thrown together like it was the last episode of a TV series and everyone came back for a final farewell, but Hennessy's book is still part of the series for next year. I'm a fan of having past characters part of other books in a series, all of them here felt like unnecessary character overload. I'm giving 4.5 stars to Beneath These Shadows. ♥

Read my reviews for the Beneath series:

Beneath This Mask (book one) - five-plus stars - My Review

Beneath This Ink (book two) - five-plus stars - My Review

Beneath These Chains (book three) - five-plus stars - My Review

Beneath These Scars (book four) - five-plus stars - My Review

Beneath These Shadows (book six) - 4.5 stars - My Review (posted above)

Purchase Beneath These Shadows on Amazon | B&N | Kobo.