Review: "Beneath This Mask" by Meghan March (Beneath #1) 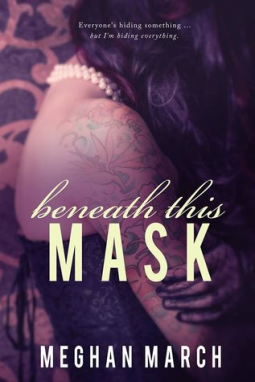 At twenty-two, Charlotte Agoston turned her back on the life she once knew and left New York for parts unknown. She left behind her parents, their plush residence, and the money that made their lives more than comfortable. The sweet girl with the strawberry blonde hair, pale skin, and striking aqua-colored eyes needed to escape from all the questions and accusations and everything that was being said about their family and start over, where no one knew her or the mess she no longer wanted to be a part of.

"Each tat was a conscious, deliberate choice to move toward the new me."

A year has passed and Charlie Stone is living her life on her terms in New Orleans. With her tri-colored dark hair and tattoos in various hues on her arms and ribs, she's surrounded by a small but loyal and trusted group of friends and her beloved dog Huck. But beneath everything that people see are secrets that she isn't ready to reveal and she isn't sure she ever will be. The only one who knows is her landlady who just happens to be the mom of a close friend. She prefers it this way, hiding beneath her mask.

"You have my number. Call me when you want more than a quick fuck."

When Simon Duchesne enters the tattoo shop, all he wants to do is to dissuade his best friend from pushing through with getting his soon-to-be wife's name tattooed on his butt. Then he notices the pale tattooed goddess with eyes the color of aqua and everything else fades away. There's something about her that calls to him and even though she shoots him down, he isn't easily thwarted. However, he isn't interested in a one-night stand; he wants more, maybe more than she's ready to give him or anyone else.

"Fuck. I could fall in love with this man."

Charlie's drawn to Simon as much as he is to her but she's afraid of letting him in, of letting him know what's behind the colored hair, piercings, and tattoos. If he finds out what she's hiding, he may reject her, disgusted by the secrets that still haunt her. Knowing that he's from a political family with possible political ambitions of his own, Charlie is worried by both the attention that being with Simon will entail and by the backlash it may cause him and his campaign should the truth about her ever surface.

"...that was exactly what Charlie had become for me. Home."

While Charlie does decide to take a chance and becomes involved with Simon, she's very aware that she doesn't share too much of her personal information or history with him. She appreciates that he tries to tamp down on his curiosity but she also knows that there's only so much patience a person can have. When the truth of her identity comes out, Simon is hurt that Charlie chose not to trust him. She decides to run, but for how long and will she ever be ready to sacrifice her present for a chance of a future with Simon?

"Do you do this on purpose?"

"The exact opposite of what I expect?"

Goodness, Beneath This Mask had me from the beginning and wouldn't let go 'til the very end. The story was intoxicating and appealing, switching from tattooed bad boy and flawless good girl falling in love to secretive and complicated bad girl and honest but flawed good boy . There were twists, some of which you don't see coming, creating an original spin to differentiate itself from others in its genre. The writing draws you in but gives you breathing room rather than suffocates you with information overload.

The cast of characters, from Charlie and Simon to the supporting cast, demanded that you pay attention because they were far from the run-of-the-mill personalities that litter countless books out there. Being a dog lover, I adored Huck and appreciated that he was more than merely decorative. The things that Simon did for Huck because he knew how important the dog was in Charlie's life made me a fan for life. The scene in the last chapter had me squeeing in delight because a guy willing to do that is simply squee-worthy.

Just like what Charlie thought of Simon, Beneath This Mask tended to do the opposite of what I expected it to and same goes for its characters. I absolutely loved this book and am proudly putting it on my list of favorites for 2015. I'm so looking forward to reading the next book in the series and will definitely look into the other book, Flash Bang, that author Meghan March previously published. I highly recommend this gem of a book to my fellow bookaholics and am giving it a five-plus-star rating. ♥♥♥

Grab a copy of Beneath This Mask on Amazon | B&N | Kobo.