Review: "Whatcha Gonna Do With a Cowboy" by Jodi Linton (Deputy Laney Briggs #1.5) 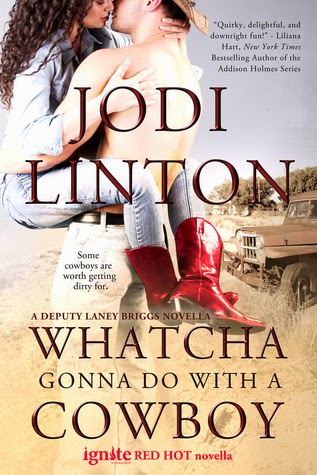 Whatcha Gonna Do With a Cowboy is a novella in the Deputy Laney Briggs series by Jodi Linton and comes after the first full-length novel. For a short read, this one had its fair share of action and a heck of a lot more steam compared to its predecessor. The events here take place about six months after the end of book one, though this can be read as a standalone. Of course, if you're like me, you'll want to read the books in order to give you a better idea of the back story between the two lead characters.

With the town of Pistol Rock now needing a new sheriff, Deputy Sheriff Laney Briggs believes she's the better candidate compared to her bumbling and oh-so-lazy fellow deputy. When they stumble upon the passed out football coach of the local high school, they wouldn't really have given him a second glance if not for the fact that he was dressed in some rather skimpy lingerie. As soon as Laney goes looking for the coach's wife, she realizes she's gone missing but comes face-to-face with hot U.S. Marshal Cole Larsen.

Cole tells Laney that the coach's wife is actually someone he's been after for several years and has been using an alias while trying to steal as much money as she can from the men she seduces. While it appears that there was more to the now-missing coach's wife than meets the eye, Laney feels as if the U.S. Marshal isn't telling her everything regarding his interest in the case. So, is missing woman a suspect or a victim? Laney then turns to her favorite Texas Ranger and boyfriend Gunner Wilson for help.

Like I mentioned earlier, this novella seems to make up for the steam missing in the first book, though it still feels as if it's a bit lacking in the romance department. Romance and sex are not synonymous with each other, fellow bookaholics, because one can exist without the other in books. I thought the inclusion of Cole would be an interesting twist to the Laney-Gunner dynamic but that fizzles rather quickly. This still has the same sassy humor that I found irresistible and loved in book one.

All in all, this was a good novella though, I really must say, the editing issues were still as present as ever, much to my disappointment. A handful, I can deal with, but the editor in me can't help but notice these things and when they're as plentiful as the ones here, my heart breaks a little because it does take away from the story and characters. Still, it was an entertaining read and so I'm going to give Whatcha Gonna Do With a Cowboy four stars and am moving on to the next novella! ♥

Grab a copy of Whatcha Gonna Do With a Cowboy on Amazon | B&N | Kobo.