Review: Beneath These Lies by Meghan March (Beneath #5) 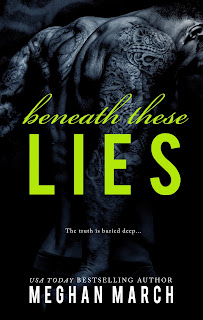 Beneath These Lies is the fifth novel in the Beneath series from Meghan March and was the first one that I didn't read prior to, upon, or right after it's release. I finally got around to reading it because I had signed up for the tour for the latest addition to the series and I have this thing about trying to read all the books in a series in order even if they're all touted as standalones. I've loved this series from the beginning and fangirled over the first four books. I must say, though, that book five left me a bit wanting. I confess that a lot of that was due to my always having pictured Valentina Noble with Rhett Hennessy (woohoo to finally learning Detective Hennessy's first name!) and she ended up getting paired with Rix--aka Beauregard Hendrix--leader of the New Orleans Down 'n Out or NODOs. a criminal gang in the city. The three of them are tied together in this story: the law enforcer and the law breaker and the woman they both want. Setting aside my thing for Hennessy, I loved the story as a whole and the twist that the author gave us in the last parts of the novel. While not my favorite, this was still a good addition to the series.

Valentina knows what it's like to be a victim, but she's moving forward with her life, although she does have a tendency to still be this damsel in distress with both Hennessy and Rix rushing to her rescue more than once. Valentina was an intriguing supporting character in Beneath These Scars, so I was looking forward to her becoming a main character, but somehow, she fell short of my expectations. To be fair, she had huge shoes to fill, what with the first four heroines in the series, and while it's easy to say that you judge a book on its own merits, this is part of a series so comparisons can't always be avoided. Now, as far as Hennessy and Rix were concerned, Hennessy will always edge Rix out, and I liked getting a few more bits and pieces to his story here, but Rix was such an intriguing man, and because I figured out what the twist was going to be early on, my opinion of him changed a few chapters in. I know that there was a lot of secrecy as to who the book would be about before its release and soon after, but with seven months having passed, I decided to mention names in this review. Beneath These Lies garners 4.5 stars. ♥

Purchase Beneath These Lies on Amazon | B&N | Kobo.