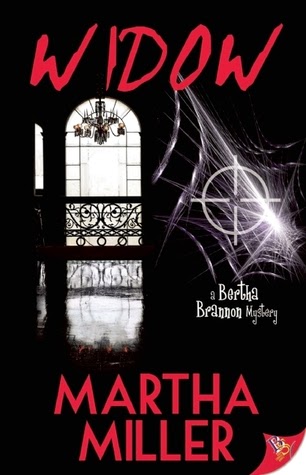 Widow by Martha Miller is a suspense thriller that follows the lead character, Judge Bertha Brannon, dealing with the death of her partner, police sergeant Toni Matulis, during a reported domestic violence call. While Bertha experiences grief and mourns the untimely death of Toni, she tries to handle caring for their daughter Doree and going on with their lives. However, Bertha begins to receive threatening phone calls, and even as she asks questions regarding what happened to Toni, she doesn't realize just how in danger her life is until bodies start piling up.

Okay, I have to be honest. It took me longer than usual to finish this book. It doesn't even hit the 300-page mark but it just felt SO lengthy because the story was dragged out much more than I would have liked. There were moments that I was bewildered that Bertha was taking so darn long to realize that something more was going on with regards to Toni's death. Yes, she would sometimes wonder about whether she was missing something or not, but goodness, it felt like forever before she put the other murders and the attempts on her own life together. When she started questioning the ambulance driver about the night Toni died, I thought that it was the beginning of her trying to unravel the mystery, but nope. Life went on and on and on...I felt so frustrated for more than half the book!

I will say this for the book: I liked that I wasn't able to figure everything out. While it was obvious that there was more than one player in the whole conspiracy, learning who all the players were by the end of the book made what felt like an excruciatingly long read slightly worthwhile. I was particularly surprised by one particular character but I can't say why because then that would spoil the book for those who are planning on reading it upon its release in a few days. ^.^

If you're looking for romance, you won't find it here, though the love story of Bertha and Toni is an interesting one and Bertha's wanting to get answers and justice for Toni once it was clear that what happened was cold-blooded murder shows just how much love these two shared. If you're after a good mystery, then you may want to give Widow a whirl because, at the end of the day, that particular aspect stood up quite well in the book. All things considered, I'm giving Widow, which may or may not be the first in a series, three stars out of five.

Grab a copy of Widow on Amazon | Barnes & Noble.