Review: "Santa to the Rescue" by Adele Downs 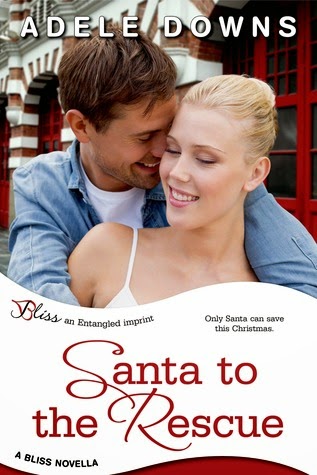 Note: This ebook was provided by Entangled Publishing via NetGalley in exchange for an honest review.

Santa to the Rescue is a novella by Adele Downs and was originally released in November of 2013 under Entangled Publishing's Flirt imprint. It's now being re-released under the Bliss imprint in time for the holidays. I never read the book during its first release so I can't really say if the story has stayed intact. This review is based solely on the re-released edition. ^.^

James "Jamey" Tucker has only been a firefighter at the Appleton Fire Station for a few months and is still feeling his way through. With the holidays right around the corner, it's a little difficult for him to truly get into the Christmas spirit. When he comes across a woman in scrubs singing Santa Baby along a supermarket aisle, he wonders if this is his chance to finally have a merrier season.

Heather Longhurst is a pediatric nurse who hasn't had much luck in the love department. When she meets Jamey Tucker in the supermarket and he does something unexpectedly nice for her, she invits him over to the hospital for some cookies. Unfortunately, he has to cancel due to a conflict at the fire station but Heather sees it as another man failing to keep a promise made.

Jamey wants to be able to make amends to Heather but he isn't exactly sure how. Heather wonders if she should have given Jamey a bit more leeway but she's been burned too many times already. It won't really take a Christmas miracle but more of Santa coming to rescue what could be a match made for the holidays ending with a merrily ever after.

For such a short story, I'm glad there were no declarations of undying love because that would have been totally unrealistic. I did feel as if Heather's reaction to Jamey's cancellation was a wee bit overly dramatic and Jamey's efforts to making it up to her were a tad overboard for two people who hadn't even been out on an actual and official date yet.

All in all, this was a super quick read and could be something that other readers may enjoy, especially with Christmas less than a month away. I do love reading holiday-related books during this particular season so I certainly appreciated being able to read and review this novella. I'm going to give it three stars because the story was cute and the characters had potential. ♥

Grab a copy of Santa to the Rescue and Ms. Downs' other books on Amazon | Barnes & Noble.