Review: "Rex and the City" by Lee Harrington 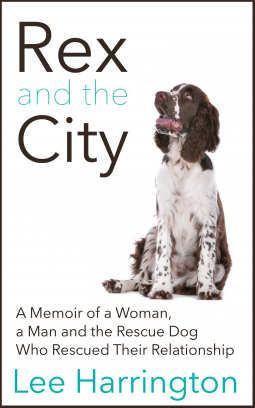 Note: This ARC was provided by Diversion Books via NetGalley in exchange for an honest review.

My family and close friends know how much of a dog lover I am. From the time I can remember, we've always had at least one dog in our house and even though we've had other creatures come and go as pets (i.e. rabbits, hamsters, guinea pigs, turtles, fortune lobsters) and my home has had cats and the re-emergence of tropical fish, the one constant has always been dogs. Books about dogs usually catch my attention so I simply had to put in a request to read and review Rex and the City: A Memoir of a Woman, a Man, and the Rescue Dog Who Rescued Their Relationship by Lee Harrington when I saw it on NetGalley. ^.^

A bit of searching online shows that this book has had two prior incarnations: Rex and the City: A Memoir of a Woman, a Man, and a Dysfunctional Dog (originally released in 2006) and Rex and the City: True Tales of a Rescue Dog Who Rescued a Relationship (originally released in 2011). The stories enclosed were originally chronicled in the author's column in Bark magazine entitled Rex in the City. This new edition includes an explanation as to what has happened since the original publication of the book plus a bonus chapter and a postscript.

This was a great "dogmoir" about Lee and her then-boyfriend Ed and how their lives change when they impulsively decide to rescue Wallace, an English Setter mix, from a shelter in 1997. Both Lee and Ed had their struggles at the very beginning, especially since they knew absolutely nothing about Wallace's history prior to being in the shelter. Wallace himself was obviously going through his own difficult adjustment period with his new dog parents, making both Lee and Ed presume that the poor dog had been abused by his former owner.

Even after he had adjusted to his new life in the city and with his dog parents, Wallace was, by no means, a perfectly well-behaved dog. He still had certain issues and that's something I was absolutely able to relate to. I've had my dog Oliver for over eight and a half years and while he can be the sweetest dog around, he can also be very hard-headed and still has certain behaviors that I have miserably failed to break him from, but then I've been told that he gets that from me. Like mother, like son, I guess. ^.^ My fellow dog parents out there will understand what I'm talking about.

This book had me smiling and even laughing at certain parts, and yes, it also had me tearing up in others. There's something about a dog that simply makes you see them as a true part of your family and with a lot of people like me, they become our children, just with fur and a tail. I'm sure from his perch over at the Rainbow Bridge, Wallace is happily watching over both Lee and Ed, even though they may no longer be together, and he's quietly thrilled that countless people have read his beautiful story. I'm going to give Rex and the City: A Memoir of a Woman, a Man, and the Rescue Dog Who Rescued Their Relationship four stars and recommend it to my fellow "dogmoir" lovers out there. ♥

Grab a copy of Rex and the City on Amazon | Barnes & Noble | Kobo.