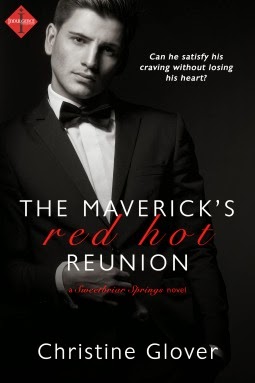 The Maverick's Red Hot Reunion is the first book in the Sweetbriar Springs series by Christine Glover and is a second chance romance about two people who were once very much in love and engaged to be married. When a devastating loss and discovery forces one of them to end the engagement, both are heartbroken but go on to lead separate lives. Five years later, they unexpectedly meet again, this time to work together to make their best friend's dream come true.

Zach Tanner is considered a maverick in the corporate world and it's taken hard work and dedication for him to get to that point. He's earned the trust and respect of his father and while there have been other women in his life, no one has ever gotten as close to him as his ex-fiancée. When their mutual best friend Michael Sullivan is diagnosed with ALS, Zach returns to North Carolina to oversee the renovation of the Sullivan family-owned Sweetbriar Springs Resort that Michael was working on prior to entering the hospital. Zach expects it'll be a lot of work but what he doesn't expect is his ex-fiancée leading the reconstruction of the spa and resort.

Kennedy Gibson is all in when it comes to the reconstruction of the Sweetbriar Springs Resort that her best friend Michael's family owns and operates. She's taken over her own family's construction company and knows she's more than capable. However, Michael's been MIA and when her ex-fiancé Zach Tanner shows up instead of Michael, she realizes just how serious their best friend's condition is. Now, she has no choice but to work side-by-side with the one man she's ever loved. They may still be attracted to one another but she's kept a secret from him for five years and doesn't want to risk getting involved with him and hurting them both in the process.

I quite liked this story, especially since it was so much more than I expected. This isn't a fluff second chance romance wherein the lead characters meet and fall in love all over again. There are a few complications in Zach and Kennedy's love story and while the physical attraction is still very much there, it takes a while for them to deal with the more delicate issue of their actual feelings for one another. The true reason behind their breakup, one that Kennedy doesn't share with Zach until much later in the story, proves to be the very same reason that another chance at love may be doomed to fail.

Aside from the main love story plot, the side plot about Michael's ALS and how he and his family and friends deal with the diagnosis was handled well. The fact that Michael himself refused to allow people to treat him differently and that he wasn't looking for sympathy made him an ideal representation of countless individuals who have ALS and struggle with it day in and day out. From his family being very protective to Zach's wanting to take control and explore every medical avenue possible, the reactions of Michael's loved ones may be something that those in the same position can easily relate to.

I initially decided to read The Maverick's Red Hot Reunion as a prelude to my reading and reviewing the upcoming release in the series, The Movie Star's Red Hot Holiday Fling, but this book stands alone quite well and I'm glad that I picked it up and read it. With a story that tugs at your heartstrings but doesn't pull them to the point of it feeling like emotional manipulation and characters that are realistic yet still hopeful in their own ways, The Maverick's Red Hot Reunion was a worthwhile read and I recommend it to my fellow bookaholics. It gets 4.5 stars and I'm looking forward to reading more of the Sweetbriar Springs series. ♥

Grab a copy of The Maverick's Red Hot Reunion on Amazon | Barnes & Noble.