Review: "A Light in the Window" by Jolyse Barnett 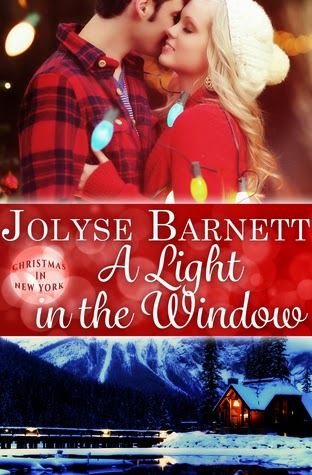 A Light in the Window by Joslyn Barnett is the third book in the multi-authored Christmas in New York series. The series tells the tale of a group of girlfriends and the men they fall in love with. I read all four books in one day. Once I started with book one, I just couldn't help myself and had to find out what was in store for the other friends. ^.^ While each book can be read as a standalone, I do recommend that they be read in order because the stories are loosely connected.

After years of doing everything that other people thought was best for her and following a plan that hasn't led her to anything fulfilling, personally or professionally, Jade Engel finds herself at the proverbial crossroads of her life. She used to be the girl who walked to the beat of her own drummer only to decide that maybe normal and safe was better for her. That meant conforming and letting go of her childhood best friend, Benji.

Ben Stephens is no longer the geeky kid Jade remembers from their childhood. He's grown into a good looking man and is now the successful owner of his own film production company. Ben has never forgotten Jade, his first love who publicly rejected him in their school cafeteria when they were both in middle school. When he bumps into her unexpectedly, he wants to reconnect with the friend he once had and to get to know the woman she's now become.

There's a very obvious and very mutual attraction that goes on between Jade and Ben but Jade has been warned by her overbearing and meddlesome mother to stay away from him, believing that he influenced Jade's brother to become an alcoholic. When Jade finally grows a backbone and follows her heart, she and Ben begin what's supposed to be a friends-with-benefits relationship. Even as their feelings grow, they mistakenly think the other isn't ready to commit.

I'll admit that the Jade I glimpsed in the previous installments of the series seemed different from the one in this book. Of course, the bits and pieces don't really give the whole picture so I had to shelve the Jade I had in my head for the one here but I was satisfied with how she developed throughout the story. Ben was simply a nice guy and the fact that he still wanted to be friends with the girl who humiliated him and broke his heart shows exactly that.

A Light in the Window shows that the path to happiness begins with being honest with yourself and living the life you want to live and not the one dictated upon by others or having to meet the expectations of family and friends. This was the author's first published novel and she did a good job of putting together somewhat of a second chance romance and friends to lovers story set in a beautiful winter wonderland during the holidays. It gets four out of five stars. ♥

Grab a copy of A Light in the Window on Amazon.