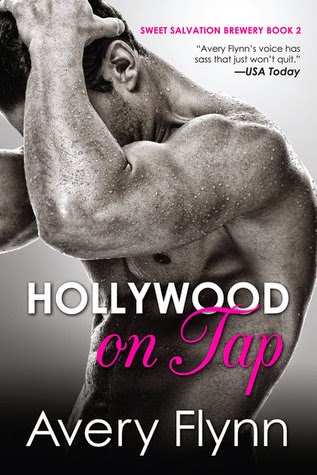 Note: This ARC was provided by RockStar Lit PR via NetGalley in exchange for an honest review.

Hollywood on Tap is the second book in the Sweet Salvation Brewery series by Avery Flynn. The series is about triplets who inherit a brewery from their late uncle in the very town that each of them thought they had left behind permanently. The first book spotlighted oldest Sweet triplet Miranda and her love story with Logan Martin. In this second installment, we now have the middle triplet who has a tendency to over-organize and her own story with the brooding brewmaster of Sweet Salvation Brewery.

Natalie Sweet likes to keep her world as orderly as possible, always making sure that she's in control of everything around her. Her ideas are always planned out in written proposals, flowcharts, and anything else you can put together visually. She likes keeping everything organized and prefers to live a chaos-free life. Doing exactly that for the very disorganized and struggling brewery she and her sisters now own sounds like something she was born to do but the one person she can't seem to get on board is their silent and stubborn but oh-so-attractive brewmaster.


Sean O'Dell is living life the way he wants to, on his own terms, without having to worry about what other people are going to say or having those who think they know better dictate upon him. He's loved working at the Sweet Salvation Brewery ever since the late owner took him under his wing. However, Sean's been on the run for years and has been keeping secrets because he doesn't want to go back to the life he once had. While it would be so easy to pick up and leave should he ever be found out, what he doesn't count on is meeting and falling for his employer.

I really liked Hollywood on Tap and appreciated that it really was about Natalie and Sean and wasn't cluttered with too many comings and goings of the previous lead characters from book one. There was chemistry between the two lead characters and I enjoyed the dynamic between these two opposites whose love for the brewery and feelings for one another transcended whatever else was different about them. There's a hint of mystery and suspense in this second book, an added touch that I liked. All in all, Hollywood on Tap is a good book to curl up with and I'm giving it 4.5 stars out of five. ♥

Grab a copy of Hollywood on Tap and Ms. Flynn's other books on Amazon |Barnes & Noble.