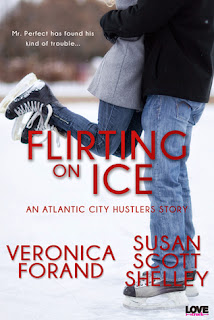 Flirting on Ice is the first book in the Atlantic City Hustlers series by the writing duo of Veronica Forand and Susan Scott Shelley. The series is about a professional ice hockey team by the same name and I'm going to go ahead and assume (though you know what they say about people who assume) each book will probably spotlight one player and the woman he falls in love with.

When I read the synopsis for this book, I was immediately drawn in by the idea of Zac Elliott and Heather Ryan, the team's captain and star player and the daughter of the team's owner, falling for one another. The thing is, he just happens to be in the middle of negotiating a new contract with the team and they both know that her father won't exactly be thrilled about one his players dating his only child.

News quickly comes out about the two of them being together and the reaction is negative from almost all sides: Heather's father, Zac's agent and most of his teammates, and the team's fans. Even when they try to stay as far apart from one another in public, they can't resist staying in touch, even if it's just through text messages and phone calls. And then they meet again and a photo of them sparks a terrible frenzy.

This was a really quick read and I was able to finish the book in one sitting. It had a lot of potential, what with a good plot and likable lead characters. And while I felt that the book was good in parts, it did feel rushed and I wanted there to be more character development. Yes, Zac and Heather had chemistry and he's been interested in her for four years but it was like going from zero to sixty in less than two seconds.

I found myself wondering about Ben Shaffer, the team's general counsel and Heather's neighbor. It was weird that he had lied to both Zac and Heather, claiming that one said something less than flattering about the other and vice-versa. I get that he wanted Heather but the fact that Zac and Heather weren't even close prior to that one walk on the beach (which Ben couldn't have witnessed) made what he did mind-boggling.

I did like Flirting on Ice but it did leave me wanting. I've read shorter stories that have wowed me with how complete they felt in the limited number of pages they had. I so wanted that to happen with this book but it fell just short of my expectations. This was good but I believe it could have been so much better. All things considered, I'm giving it three stars out of five. ♥

Grab a copy of Flirting on Ice on Amazon | Barnes & Noble.