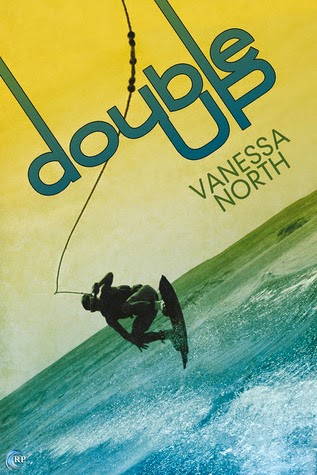 Note: This ARC was provided by Riptide Publishing via NetGalley in exchange for an  honest review.

Double Up by Vanessa North is an M/M romance about a forty-year-old former wakeboarding champion named Ben Warren and a thirty-year-old architect named Davis "Dave" Fox. Ben has been spending his years after forced retirement selling wakeboarding gear and equipment and giving lessons to newbies interested in the sport. He meets Dave when the latter visits the store asking for lessons in order to forge a relationship with his half-brother who just happens to be a rising superstar in wakeboarding.

This was a fairly quick read and I liked reading about both the sport itself, something I enjoyed watching during the few years it was part of the Summer X Games, and the budding romance between the two lead characters. Those unfamiliar with the terms used in describing certain moves and tricks related to wakeboarding may feel lost but a little research on handy, dandy Google will keep you on track. I'm pretty sure there are videos online that may help you get a good visual on what the stuff described looks like when performed by those adept at the sport. ^.^

As for the romance between Ben and Dave, it was a mix of intense and sweet and I liked the whole blushing thing that Dave had going. The two don't really have a great deal in common but those differences are what help balance things out in their relationship. Things get intense pretty quickly and maybe it's because the book is short compared to full-length novels. Ben keeps secrets from Dave and while he does divulge one and intends to do the same with the other, it becomes too late and Dave doesn't understand Ben's reasoning. When they reach an impasse, both men end up wondering if they can move forward or are destined to end things just as they were getting serious.

I liked Ben and Dave as the lead characters but Eddie Russell, Ben's closest friend, definitely stole the show. The guy had a presence about him that was difficult to resist and I wouldn't mind reading his story if the author ever decides to write about him and his kinkiness at length. ^.^ With a good cast of characters and a sports-themed story that was enjoyable, Double Up is a book that would be perfect to take to the lake while enjoying the outdoors, regardless of what season it is. I'm giving it four stars out of five. ♥

Grab a copy of Double Up and Ms. North's other books on Amazon | Barnes & Noble.