Review: "Crashing Down" by Cathryn Fox 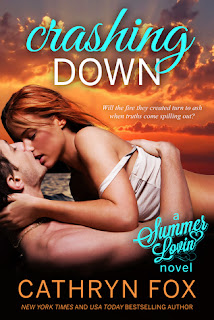 Note: This ebook was provided by Season Publishing via NetGalley in exchange for an honest review.

Crashing Down by bestselling author Cathryn Fox is the first book in the multi-author Summer Lovin' series. Each book in the series appears to be a standalone though they are all set at the fictional Stone Cliff Resort in Canada and the characters are part of the staff and/or are guests. If this first book sets the tone for the rest of the series, then it did one heck of an excellent job because this was difficult to put down and I couldn't help but read it in one sitting.

Noah Ryan is not one for adhering to rules and regulations. He's been known to bend them, and if he ends up breaking a few, it doesn't really count if he doesn't get caught. He knows what it's like to do what's expected of you, living each day meeting deadlines and surpassing the standards set by others. He refuses to be tied down again, believing that his rigidness and ambition caused him to fail his best friend. Now, Noah does what he wants but doesn't want to feel anything more than he needs to...until he meets Kat.

Kathryn (with a "K") Lane is a stickler for following the rules and doesn't want to do anything that her father may look down upon. She's never had much of a social life and is taking the college course her father wants her to but not the one that she truly wants. Keeping her scholarship requires her to be better than her peers and to do more than what's expected of her. Her best laid plans go awry when she begins her internship at the Stone Cliff Resort and meets a staff member who makes her want more--Noah.

Noah doesn't even want to consider starting anything with Kathryn, who reminds him of everything he used to be, but an impromptu bet with another staff member leaves him with no choice. However, the more time he spends with Kat, the more he sees what a genuinely nice and sweet person she is. He doesn't think he deserves to be with someone like her but he also sees that she may end up living an unhappy life if she isn't honest with herself and her father about what it is she's really passionate about.

Noah and Kat spend the summer getting to know each other better and rediscovering the people they really are. Their feelings grow and they make realizations about what it is they truly want. When the truth about the bet comes out, Kat's trust in Noah is shattered, leaving her wondering if everything they shared during the summer was all a lie. Noah needs to prove to Kat just how much she means to him and that he's become a better person because of her but that's easier said than done.

There's angst but it's the kind of angst that makes you feel even more for the lead characters, knowing that their happiness isn't just limited to their being together but extends to them being truthful with themselves and needing to move forward with the lives they want, not the lives others want for them. This isn't just another bad-boy-and-good-girl-fall-in-love story; it's about finding the real you and pursuing your own dreams. Noah and Kat aren't even actual opposites because Noah recognizes himself in her.

I loved this book and would recommend it to anyone who wants something worthwhile to read in an hour or two. The characters are engaging and well-developed and the story captures your heart with its honesty. I shall be checking out the other books in the series and can only hope that they live up to the high standard set by Crashing Down. This was one of my favorite reads for the year and even if it did have a few editing issues, I'm going to give it five stars because it's just that good. ♥

Grab a copy of Crashing Down and Ms. Fox's other books on Amazon | Barnes & Noble.