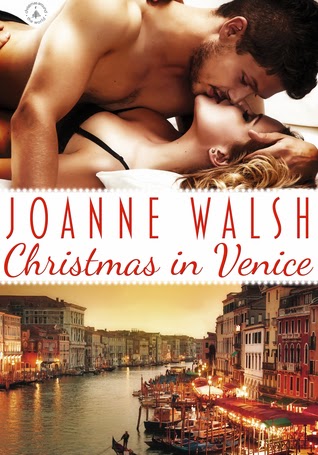 Christmas in Venice by Joanne Walsh is the fourth and final book in the multi-author Christmas series Christmas Around the World. This last installment takes readers to beautiful Venice, Italy and is a second chance romance that finds ex-spouses brought together by an unexpected snowstorm during the one holiday that evokes very painful memories for them both. This book is racier than the three before it but it was definitely a great way to end a series that I've grown rather fond of. ^.^

Ashlynne O'Reilly and Lorenzo di Grechi haven't seen each other since their marriage ended in divorce five years ago. When Lorenzo finds Ash stranded at an airport, he offers her to she stay with him while waiting out the "once-in-a-century" snowstorm at the very apartment they once shared as a married couple. Things are awkward in the beginning and even though certain things have changed with both of them, it seems that the attraction and feelings never really went away.

After giving her life an overhaul post-divorce, Ash is still holding on to the anger she feels towards Lorenzo, what with the circumstances that led to the end of their marriage. She's finding it difficult to fully reconcile the obviously changed man before her and how things were five years ago. Even though her feelings for him are still very much alive and it's obvious he feels the same way about her, she's not sure there's any chance for a future together if she can't trust and forgive him.

Ah, second chance romances hold a special place in my heart, mainly because there's already a past that exists between the two lead characters and then something that forces them to let go of what they once had only to find each other again later on. For a series that's perfect for the cooler temperatures of the Christmas season, Christmas in Venice provides some heat and romance to keep readers warm and toasty. This series ender gets four stars. ♥

Grab a copy of Christmas in Venice on Amazon.