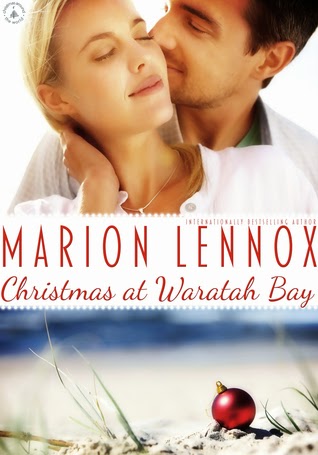 Christmas at Waratah Bay by Marion Lennox is the first book in the multi-author series Christmas Around the World. The story is set in Waratah Bay, a picturesque town located in Victoria, Australia and is about two people who have lived in solitude for far too long and discover the true meaning of family and how Christmas truly is a time for giving and receiving, especially gifts which are intangible but are most precious.

Sarah Carlton is a successful model from New York who returns to Waratah Bay in order to visit Harold, the man she considers more of a father than her biological one and who only has a few days left. At the hospital where Harold is confined, she meets Max Ramsay, Harold's neighbor and the one he sold his homestead to. Max's negative reaction towards Sarah makes her believe that he's judged her based on his own preconceptions, especially since Harold has lived alone for far too long. While she's apologetic for not having come sooner, Sarah stresses that what's important is she gives Harold what she feels will make him happiest--a Christmas at home.

Max isn't thrilled at meeting Sarah but he does acknowledge that she's putting in more effort in making Harold's last Christmas a truly special one than he expected. Max offers up Waratah Bay Homestead, something that surprises both him and Sarah, especially since Max prefers being alone. From there, Max's self-imposed solitary confinement is completely tossed aside as the arrival of one of his sisters and her family plus the inclusion of two of Harold's friends and the world's ugliest puppy thrust his once quiet world into chaos. Noticeably, Max finds himself changing his mind about Sarah and about other things he's held true for years.

This was a sweet Christmas romance and one that anyone can quickly get through in one sitting. The love story itself was nicely played out and it actually didn't feel as if it only took three days, possibly because a lot was packed into those three days. The twist is an interesting one and one that I had not guessed, so definite props for that. An added bonus were the dogs because I rarely say "no" to anything dog-related. ^.^ There were a few editing issues but hopefully they were fixed before the book was officially released. Taking everything into consideration, I'm giving Christmas at Waratah Bay four out of five stars. ♥

Grab a copy of Christmas at Waratah Bay on Amazon.