Review: "The Chase and the Catch" by A.F. Henley 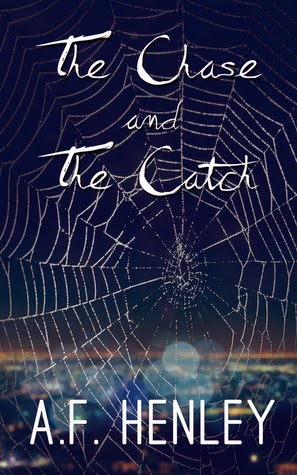 The Chase and the Catch by A.F. Henley is one of those novellas that is able to convey an extremely well-written and original story that has you flipping the pages without realizing just how quickly time has passed. Add to that characters that are so flawlessly flawed that there are moments you find yourself wanting to give them a pat on the head one minute and then wanting to smack them upside the head the next and you've got yourself one hell of a fantastic read.

John Liege and Parker Chase don't appear to have much in common other than they're well known in their respective fields, with John being a famous and successful romance author and Parker a far more famous and successful Hollywood actor. They're perspectives on life in general and love in particular are at odds but John is at Parker's home to do a job, even though writing a biography isn't exactly his forte. Now, why would a very popular actor call on a writer known for romance novels to pen his biography?

John has had trouble writing ever since an troubled fan of his committed suicide right before his very eyes. Not only did he lose his writing muse but he also ended up losing his lover, confidence, and peace of mind and deals with some form of guilt, wondering if his inaction towards his fan's misguided advances led him to jump off the bridge on that fateful day. So, while his current project may be different from his personal norm, the distraction that is Parker has him focusing on something other than that tragedy.

Both John and Parker are complicated characters and the fact that John comes off as a hopeless romantic and Parker a jaded cynic make their verbal repartee rather compelling. It's almost like foreplay to what may or may not be something more between the two of them. The fact that John is hesitant to pursue anything physical or otherwise with Parker only has the latter more determined to continue the chase. If John allows himself to get caught in Parker's pursuit, what will it cost him in the end?

While reading the book and seeing Parker flirting and trying to get John to finally acquiesce to what he wants, I kept wondering to myself, "What's the catch?" The warning that Parker's butler/valet/nanny gives John in the first chapter sets the story and had me hooked, wary of Parker's intentions while wanting him to be more than what he was trying to appear to be. John was like the fly to Parker's spider, being led and entangled in a web that seemed designed for something surreptitious.

Speaking of Parker's butler/valet/nanny, William Anson was just as interesting as the lead characters, what with his witty comebacks and surprising observations. It almost felt as if he was trying to save John by pulling him away from Parker but also pushing John towards Parker time and again. His role in what happened gave me pause and made me question his intentions, though I doubt that he approved of the incident. After all, he did give John fair, albeit cryptic, warning.

The more I read the book, the more I fell in love with it. When I finished it, I had the silliest grin on my face. I was entertained and intrigued and I liked that I went into this book without any expectations. It allowed me to be open to anything and everything it threw my way and I loved every darn minute of it. The twists and turns were unexpected and by the end, I was more than satisfied. I highly recommend The Chase and the Catch and am giving this new addition to my list of favorites for 2014 five-plus stars. ♥

Grab a copy of The Chase and the Catch and A.F. Henley's other books on Amazon | Barnes & Noble.