Review: "Captivated by You" by Sylvia Day 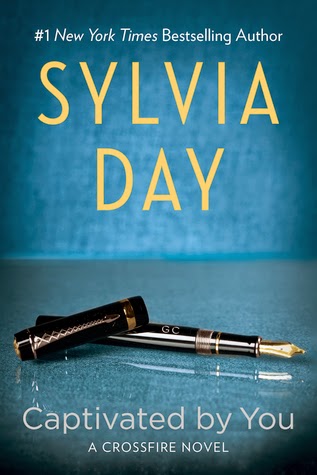 Captivated by You by Sylvia Day is the fourth novel in the bestselling Crossfire series and has been sitting on my TBR list ever since a fourth and fifth installment in what I originally thought was a trilogy was announced over a year ago. On its release day, I received a text that the paperback I had reserved at my favorite bookstore had arrived and I dropped everything just to go get it then and there. Yup, that's the Gideon effect at its finest. ^.^ I finally took one day off from the other books on my TBR list that were up for review to make time for Gideon (and Eva) and finished this in one sitting.

After the events in book three, Entwined with You, we find Gideon Cross and Eva Tramell back in New York after their whirlwind wedding. They're still keeping their elopement under wraps, with only a couple of people knowing about it, preferring to make their family and friends think that they've just gotten engaged and are now planning for their wedding. However, Gideon and Eva are still not sleeping in the same bed due to the nightmares that Gideon still has, afraid that he may harm Eva while unconsciously fighting off the demons that still haunt him.

Even though they're now married, communication and control still seem to be main points of contention with Gideon and Eva. Gideon likes being able in control of his universe, believing that it's the best way to protect both Eva and what they have together. He tends to make decisions that affect them both on his own and even though he only wants what's best, his lack of communication bothers his wife. Eva wants Gideon to fully trust her, even with the things that cause him pain and torment, but he tends to close himself off and she wonders if he'll ever be willing to change, even for her.

As they try to maneuver their way through their new lives together, people who have been waiting for the opportunity to hurt Gideon are coming out of the woodwork. In the past, Gideon always seemed immune to whatever his enemies threw his way; now they've found his proverbial Achilles heel--Eva. Whether intentionally or not, getting to Eva is guaranteed to provoke Gideon and there's no telling how he'll react if any harm comes her way. This is what spurs him into action, desperately trying to make sure that the bubble they live in doesn't irreparably burst.

You would think that this being the fourth book, the story and characters would get a bit boring or that there would be nothing new or exciting going on. The thing with the Crossfire series is that it gets better with each book. Gideon and Eva never fail to surprise me and the fact that there's always been this darkness that appears to be lying in wait within Gideon is what keeps him so interesting. Yes, he truly does love Eva but he's also manipulative and controlling and the reasons behind his behavior will, hopefully, be fully delved into and resolved as the series comes to a close in the fifth and final book.

Anyone who knows me really well knows how much of a fan of this series I am. These characters are creatively original in that they may appear to be like those found in other similar books but there's a uniqueness to them that makes them standouts. While I'm a fan of smirking male characters, it does feel as if too many of them have done it and continue to do it, so the fact that Gideon doesn't smirk (at least I can't recall him doing it) gets bonus points from me. And Eva? I love a female lead who's both strong and confident but also vulnerable and sensitive. Whiny and needy heroines get tiresome.

I was truly captivated by this fourth installment and while I am looking forward to the fifth book being released next year (please let there be NO delays!), I know I'm going to be sad as well. Gideon and Eva's love story has stuck with me from the first time I read Bared to You and saying goodbye will not be easy but let's not focus on that for now. I'm giving Captivated by You five stars and consider it one of my favorite reads for 2014. This is a series I highly recommend and it doesn't matter whether or not you liked Fifty Shades of Grey because the Crossfire series stands proudly on its own. ♥

Grab a copy of Captivated by You and Ms. Day's other books on Amazon | Barnes & Noble | Kobo.

For those in the Philippines, you can get your paperback copy at Fully Booked!