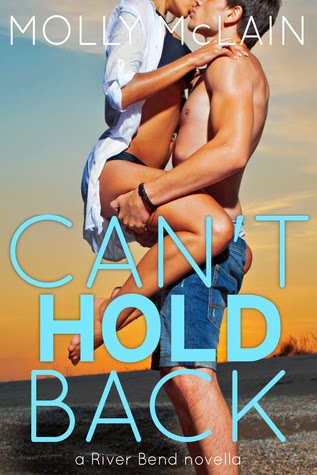 Can't Hold Back is a novella in the River Bend series by Molly McLain and was released after the first book. Readers were introduced to Dan and Maddie Hudson in Can't Shake You as a then-engaged couple and Josh Hudson's brother and Carrie Brandt's best friend, respectively. In this novella, they're in Cabo San Lucas, Mexico on their honeymoon and while things are hot and heavy between the newlyweds, Maddie wants something more from Dan but is afraid of how he'll react if she tells him.

In their relationship, it's always appeared as if Dan takes a backseat to Maddie, indulging her when she goes a bit hyper and aggressive. Maddie has never complained and loves Dan unconditionally, but now that they're husband and wife, she wants Dan to be the more dominant one. While she doesn't tell him what it is she wants, she decides to push him into action by flirting with a surf instructor. Dan may be turned on in the beginning but when the surfer takes things too far, Dan loses it.

Maddie's plan goes terribly awry when Dan walks out on her and can't seem to bear looking at or even being near her. For someone who never had a problem saying what was on her mind, Maddie's decision to not be open and honest with Dan about her sexual wants throws what was an amazing honeymoon into a tailspin. Though they've been together for a few years, it appears that there are still some things that Maddie and Dan both need to be open and honest about, especially since their marriage is just beginning.

Can't Hold Back can be read in less than an hour's time and as a standalone, though I think it's best read after the first novel simply because both Josh and Cassie make appearances here. I wasn't a big fan of Maddie's in the first book and her lack of communication skills here had me raising an eyebrow but I did warm up to her by the time I got to the end. Dan is likable and his reaction to what happened with Maddie was realistic, which I fully appreciated. All in all, this was a pretty good novella and it gets four stars. ♥

Grab a copy of Can't Hold Back and Ms. McLain's other books on Amazon.