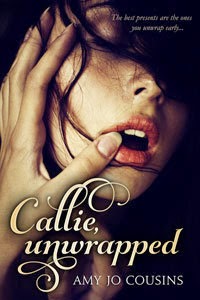 Callie, Unwrapped is the first novella in the Play It Again series by Amy Jo Cousins and is about a woman named Callie and her journey to re-discovering herself and her sexuality after eleven years of marriage that ended in divorce. In those eleven years, she stifled her formerly familiar wants and needs, leading a life of what she considered boring conventionality. All this time, she has maintained a friendship with the man she was in love with but later broke her heart. When he makes her an offer that has her curious and very much interested, will he be able to break down her inhibitions once again?

This was a really quick read but one that didn't have a dull moment in it. The story of a woman who's trying to gain back what she once had after more than a decade of tamping down on her most basic desires and does it by getting together with her ex-boyfriend and his current girlfriend makes for an interesting read. Even though Callie wants to pursue a threesome with Gabe and Kate, she experiences bouts of hesitation, her confidence scarred by those years she was on sexual lockdown. Reading the back and forth, the flirting then the backing off, was like being part of the foreplay going on.

For such a short book, you get a good idea of what kind of woman Callie was when she was Gabe and what happened to her after she left him and ended up marrying her now-ex-husband and how it was still Gabe who reawakened her. There's also a nice amount of character development that goes on but it leaves you wanting to get to know Callie and Gabe better and wondering if their relationship will develop even further than the first time they were a couple. Kate is also an interesting character, especially since she seems to be as sexually adventurous as Callie once was, making you wonder if Gabe is as stuck on Callie as Callie is on him since he seems to be leaning towards a particular kind of woman.

The story does have an end, so there's no need to worry about the oh-so-evil cliffhanger readers tend to be wary of when it comes to a series. I am curious as to what else is in store for Callie and if Gabe will still play as big a role in the next book. He is, after all, somewhat of a mystery and there's just something about male lead characters like Gabe that readers are itching to learn more about. This was a well-written novella and I can't wait to read what else happens in the series. I'm giving Callie, Unwrapped 4.5 stars out of five. ♥

Grab a copy of Callie, Unwrapped and Ms. Cousins' other books on Amazon.