Review: All of You by Callie Harper (All In #3) 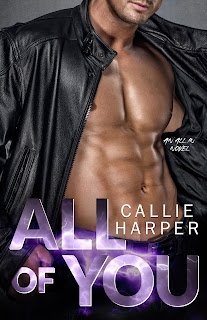 Note: This ARC was provided by the author via Foreward PR & Marketing in exchange for an honest review.

All of You is the third novel in Callie Harper's interconnected All In contemporary romance series and features Jax and Sky. These two may have developed feelings for one another over the time they've known each other, but neither one can really do much other than admire from afar. Sky is very much married, albeit to an abusive and controlling member of a motorcycle club--the same MC that frequents the bar Jax co-owns. Jax knows all too well that Sky's husband isn't exactly all that faithful, not when he sees the man with a different woman whenever he's at the bar, but that isn't enough of an excuse for him to go after the man's wife. So, Jax and Sky have Mondays, the one day each week that Jax goes to the retirement community his beloved grandfather now resides at and the place where Sky works. When things come to a head, Sky turns to Jax for help, but is she leading trouble his way?

I'm pretty sure I wasn't the only reader slash blogger around who was anxiously waiting to read Jax and Sky's story and Callie Harper certainly made sure it lived up to expectations. This third book was a well-written slow burn romance with a hint of suspense added to it to spice things up. The added complication of Sky's situation makes things precarious for her, and I know that some people saw her as not doing anything regarding her marriage, but abusive relationships have a very different dynamic from "normal" ones and saying that an abused spouse should simply up and leave is easier said than done and it's not fair to point out that they were asking for the abuse because they chose to stay. Jax was a dream--a truly good man who loved his grandfather, worked hard, and loved unconditionally. Le sigh. As always, the author has left this particular reader quite satisfied. 4.5 stars for All of You. ♥

Read my reviews for the All In series: