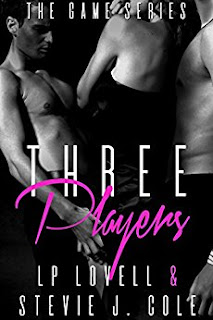 Things have just amped up in the third installment of the ongoing The Game serial from the writing duo of L.P. Lovell and Stevie J. Cole. It's the third day of her contract with Tobias Benton and Preston Lucas, and Ella Taylor is grasping at straws. She has questions that demand answers, but she knows that she can't get those answers without breaking one of the rules set forth by Tobias and Preston. Maybe the answers lie beyond the gilded cage she's in, but something goes terribly wrong when she does try to return to the life she once knew. She's no longer sure about what's true and what isn't, but what she does know is that she can't seem to say "no" to either of these two men or what they want to do to her. What happens when she learns that there are more players in the game?

I honestly didn't think it was possible but the sex in Three Players was even hotter than in the first two installments. Or maybe that's just the M/M fangirl in me that likes Tobias and Preston getting it on. As for the story itself, well, it's gotten more and more curious and if Ella has questions, well, so do I. I do think, though, that we're one step closer as to learning who this third man is--the one that Tobias talks to at the end of each day (installment). I did think that Tobias had some sort of feelings for Ella in the first two books, but after this third one, I wasn't sure anymore. And seriously, I think he's even more apathetic than Preston. This is also the first time I find myself feeling really sorry for Ella, but let's see what awaits them in the next novella. Three Players gets four stars. ♥

Read my reviews for The Game series:

One Contract (book one) - four stars - My Review