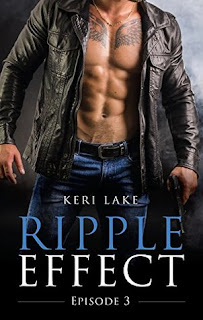 Trying to resist her is futile.

I want her. But more than that, I don't want anyone else to have her.

The more time Dylan and Rip spend together, the more entangled they become in each other's lives. Dylan has been curious about Rip from the moment she spied him from her bedroom window, and she's gotten to the point where her curiosity is making her do things that could get her into trouble with the killer that owns her body...and maybe even her heart. You know what they say about curiosity... Rip also has a lot on his plate. A contract killer's job is never done, after all. But Dylan is proving to be a distraction. She's an itch that he wants to keep scratching, but what kind of life could he possibly offer a barely legal girl? His life as Gabriel Ripley ended years ago. He's no longer the innocent he once was. He's a cold-blooded killer. Could there even be a future for these two? One may not be in the offing, not with someone still after Dylan and Ripley not knowing whether to trust his Bandit or not.

This serial is a killer! Get it? Doesn't matter. The point is, Ripple Effect has simply gotten better with each new episode author Keri Lake has released, and with this third one, she's hit one hell of a home run, but she still manages to somehow hold back just a tiny bit, almost as if she doesn't want her readers to have their fill just yet. Nope. She's already got too many of us hooked, and there is simply no frickin' way I'm going to not want the fourth and final episode in this serial, not with everything that happened in episode three and not with that devious cliffhanger AND that sneak peek into episode four. I hate cliffhangers, but the wait in between each episode isn't overly long, meaning I don't feel like the author is purposely trying to torture us. Every episode that's followed the first one has been like a reward for the patience you put in. And I've already got the ARC for episode four waiting for me on my e-reader, and I can't wait to spend my weekend with Rip and Dylan! Five-plus stars for episode three! ♥

Read my reviews for the Ripple Effect serial: