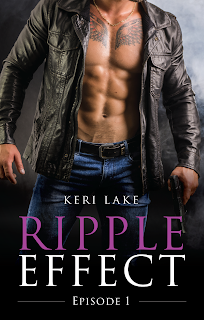 Ripple Effect is a series containing four episodes and is the latest erotic romantic suspense release from author Keri Lake. Episode one gives readers a brief but meaningful backgrounder on the main characters, Ripley and Dylan. Ripley's life is changed forever at the age of sixteen when he makes his first kill. Twelve years later, we meet Dylan, who is counting the days until she's aged out of the foster system and she can finally get away from her lecherous foster father and take her beloved dog Charlie with her. The one distraction she has is the man she watches from her bedroom window, the same one who turns out to be Ripley. Will he end up becoming her hero or the villain?

I knew this was going to end on a cliffhanger. Of course, I knew it. But ARGH!!! I'm feeling all frustrated because I need to know what happens between Ripley and Dylan but also what happens to Charlie! I can't give too many details, but let's just say that Dylan's home life was a nightmare and then what happens afterwards is just a new nightmare altogether. Ripley is every bit the killer he has evolved into, and he's clearly an antihero, but I wonder if there's any hope for redemption for him, not that he's actually actively desiring it. We've only scratched the surface of Ripley and Dylan's story, and I'm so anxiously waiting for more of Ripple Effect! 4.5 stars for episode one. ♥