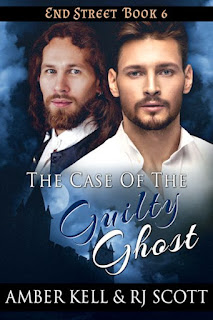 A number of my favorite series have come to an end this week, one of which is End Street, also known as the End Street Detective Agency series, penned by the writing duo of Amber Kell and RJ Scott. This paranormal romance series was always fascinating and satisfied without the need for copious amounts of text and pages. With the sixth and final book, The Case of the Guilty Ghost, readers bid goodbye to the not-so-human Samuel Enderson and his pack of paranormals who have changed his life in ways he could never have predicted when his uncle left him the detective agency that he was far more qualified to take charge of than he may have realized in the very beginning.

Upon the sacrifice of his younger brother, Bob mourns his death, which leads him to being separated from his soul mate and partner, Sam Enderson. But Sam can't resist when he hears Bob calling for him, but when he finds himself back at the detective agency, he wants answers and he wants them now. When Bob's brothers--Ettore, who gave up his life for Bob, and Radim, who murdered Ettore's lover and soul mate--unexpectedly return, Sam will be forced to confront certain truths, the most important one being who--what--he really is and what his role could be in the future of paranormals everywhere. Who will be left standing when the world around them shifts?

We get several familiar characters alongside the always present twosome of Sam and Bob. We also get Teddy the ghost's story and how he ties in with Ettore. The most important thing that gets resolved is Sam and whether or not he is human or a creature unlike any other. The series began with the main focus being Sam and at its end, it turns the spotlight back again on him. The story was paced well and there was a fair bit of suspense and action here, with everyone involved playing vital enough roles. But truly, this was Sam finally in his element and learning to embrace who he is, magic and all. I'll miss him and the paranormals. 4.5 stars go to The Case of the Guilty Ghost. ♥

Read my reviews for the End Street series:

Purchase The Case of the Guilty Ghost on Amazon.