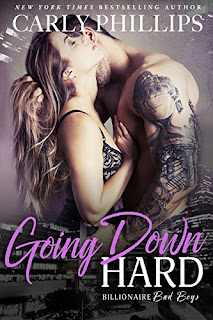 Going Down Hard is the third and latest book in Carly Phillips's Billionaire Bad Boys series and gives readers the story of Derek West, the most private among the three billionaire software creators behind the company that owns the Blink application. The son of a gardener and maid, Derek worked hard to get to where he is today, but when the daughter of his parents's former employer--who went on to fire his father after accusing his mother of theft--requests a sit-down interview with him, memories of a painful past come to the surface. Cassandra Storms made clear that she didn't think he was good enough for someone like her father to approve of, but Cassie has since regretted saying what she did. Getting Derek agree to the interview would help her get her family-owned company back on track, but the past has a way of rearing its ugly head. What chance to these two have at a future together?

Derek and Cassie's story is a mix of second-chance romance and enemies-to-lovers. There was, after all, a moment they shared when they were teens before they both headed off to college, one that was spoiled after Derek overheard what Cassie said to her friends. There's definite chemistry between the two of them, though I do think Derek's feelings towards changing as quickly as they did after not having seen her in quite a number of years was faster than I would have expected. There was also the thing with what Cassie's brother did and the fact that it was handled the way it was. If someone did to my mother what Cassie's brother did--both in the past and present--I would have demanded a bit more retribution. But hey, maybe that's just me and my vengeful nature. I did enjoy Going Down Hard enough to give it four stars, but I'm now all antsy to read Julian Dane and Kendall Parker's story. ♥

Read my reviews for the Billionaire Bad Boys series:

Going Down Easy (book one) - five stars - My Review