Review: Below the Line by Chelsea Camaron (Devil's Due MC #2) 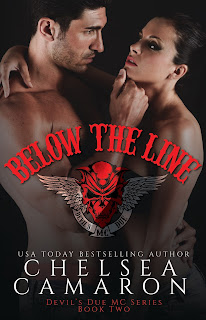 Below the Line is book number two--though the third release--in the ongoing Devil's Due MC series from bestselling author Chelsea Camaron. Owen "X" Gallow is a member of a nomad motorcycle club who have made it their mission to right the biggest wrongs that became the turning points in their respective lives--the turning points not being the good kind. His mother was a whore but she loved Owen, wanting to give him the best life she possibly could, but she was murdered in cold blood. The streets of New Orleans soon become his home, and it's there that he finds Hadley Combs. At sixteen and fifteen, Owen and Hadley become each other's family, until the time that she's taken away, and Owen believes her to be dead. Then years later, they unintentionally find each other again. But while Owen is shocked that Hadley is actually alive, Hadley can't get far away enough from Owen.

Owen and Hadley have a past, but it isn't the kind that involved sex or romance, and that's what I loved about it. They had a true connection, the rare kind that wasn't based on lust or a romantic kind of love. They were each other's ally, but any sort of plans they have been making were thrown to the wayside when the unthinkable happened. Fast forward quite a few years, and they inadvertently find their way to each other. Maybe it's fate with a bit of push from an anonymous fairy godmother whose prodding opened up a new avenue towards each other, but old wounds--and some new ones--were bound to be opened as well. I won't go into what happened to Hadley during their years apart or how everything comes full circle in a twisted and vicious way, but suffice it to say that when everything was later revealed, I was floored, having guessed only one thing when it was right on top of me.

When I think "Chelsea Camaron", motorcycle club romances immediately pop into my head because she's truly made it her niche. Like those before it, Below the Line carries a unique story to go with the unconventional arc for the series. There's certainly nothing easy about the situation that Hadley is in and fixing it is easier said than done, but boy, do I love the way Owen and his Devil's Due MC brothers handle things. This story was strong and sexy and never sappy, but it does carry with it an air of sentimentality because of the history between Owen and Hadley and all the what-ifs that come into play as well as too many lives destroyed. As was the case with In the Red, the book does have a snippet that's exclusively Mitchell Gates's, aka Trapper, and now I'm doubly curious about "Avery", though I do have a theory in my cluttered head. Below the Line gets 4.5 stars, and Bladen Jones's story is up next! ♥

Read my reviews for the Devil's Due MC series:

Purchase Below the Line on Amazon | B&N | iBooks | Kobo.