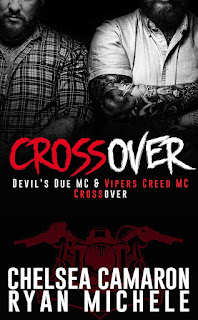 Crossover is a prequel novella that crosses over two ongoing motorcycle club (MC) romance series, Devil's Due MC and Vipers Creed MC, written by Chelsea Camaron and Ryan Michele, respectively. I've read and enjoyed all the current novels and short stories in both series--In the Red and Serving Her Soldier (found in the multi-authored Honor anthology) in Devil's Due MC and Challenged, Courageous (also part of Honor), and Conquering--so I was on-board with reading and reviewing this crossover prequel, and it turned out to be an entertaining read.

The first part is about the Devil's Due MC, which is a small nomad group of bikers that wield their own brand of justice, and we have five of the six members telling the story from the points of view: Dover "Collector" Ragnes, Bladen "Judge" Jones, Gentry "Deacon" Hawkins, Jackson "Rowdy" Presley, and Mitchell "Trapper" Gates, leaving Owen "X" Gallow the only brother who didn't have a POV. We get a bit of insight on just how different these six men are, but how they're all held together by their advocacy. This also has them searching for Hadley Combs, who is connected to X, and their story gets told in the next full-length novel in the Devil's Due MC series, Below the Line.

The second part of this prequel novella gives readers a bit of history with as far as Cade "Spook" Baker came into power as the president of the Vipers Creed MC at the age of eighteen and how he lost Trixie Lamasters in the process. Aside from Spook's, things on this end are told from the viewpoints of Wes "Stiff" Collins and Ben (no last name mentioned in the books) whose road name is "Boner". It was interesting to see how things were for these three in the beginning, as they moved forward after what happened with Spook's father, and we see how devoted Stiff is to Xander, his younger brother. I'm guessing that Boner's story will be up next in the Vipers Creed MC series.

Overall, this was an enjoyable read, though, to be honest, I wouldn't say that it was required reading with as far giving missing information, but then this is me speaking as someone who's already read the other books and stories previously published. If you're new to the series, then this would probably be a good place for you to start because it does introduce you to the core cast of characters in both series, and you'll have a good enough foundation before heading into all the full-length books, which you should read in order! Crossover gets four stars. ♥