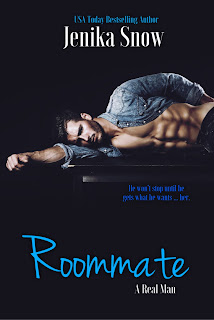 Roommate is the fifth novella in the A Real Man series from author Jenika Snow and this one is, so far my favorite among the currently available books. It's the story of Brendan and Meghan, step-siblings until their parents filed for divorce. However, it isn't the end of a marriage that has Meghan heartbroken; it's the knowledge that she and Brendan could very well end up living in different cities, or worse, different states. She's never been able to confess to him that her feelings are anything but sibling-like. She loves him, but to admit that could end the close bond they share. If only she knew that Brendan has been just as in love with her. A year later, Brendan offers up his home for her to stay at and be roommates. This could be the opportunity for him to admit his feelings because what he wants to offer Meghan most is his heart.

This was a straightforward story about former step-siblings who have been secretly in love with one another for years but have never told one another how they feel nor have any idea that the feelings are very much mutual. You go into these short reads knowing that they'll end in a guaranteed happily-ever-after, but the author was able to keep the story interesting from start to finish and I liked the relationship between Brendan and Meghan and how they didn't immediately jump each other's bones from the moment they were living under the same roof again. Overall, Roommate was a satisfying 4.5-starred read. ♥

Read my reviews for the A Real Man series: