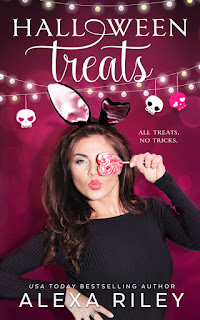 Halloween Treats is a collection of four short stories that are all set during Halloween, each one a standalone although the three older tales are part of Alexa Riley's past series. I confess that I did skip one story--Buy Me 2--but this was solely due to the fact that I had already read and reviewed the series bundle it was part of a few months ago. The three remaining stories--Riding Red, Taking What's Wicked, and the brand new Halloween Treats--each have a different feel to them but they all share the expected steamy sex. Riding Red is a paranormal romance between the new owner of the local bakery and the town sheriff, Taking What's Wicked is a story of forced submission with a twist, and Halloween Treats is a sweeter romance about an elementary school teacher and the uncle of one of her students. For those who are curious, Buy Me 2 is about a man who wants to show his former employee that what he wants is totally unprofessional, and he gets his one shot when she puts herself up for auction and he's the highest bidder.

Riding Red is the first novella in the Fairytale Shifter series and I liked the paranormal twist to the classic fairy tale of Little Red Riding Hood. Ruby has no idea that the new town she calls home, Gray Ridge, Colorado, is home to shifters. She buys the local bakery from the sheriff, whose late great-aunt was the original owner, but Ruby is having difficulty bringing in customers from Gray Ridge, relying instead on patronage from tourists. When she finds out that Sheriff Dominic Wolfe has been on a self-imposed campaign to dissuade the townsfolk to go Red's Goodie Basket, Ruby is not happy. But there's a reason Dominic is keeping everyone away, and if he confesses what that reason is, he'll be forced to confess what he really is as well. This was hot, with enough thrown in to make me curious about the rest of its the books.

Taking What's Wicked is the fifth novella in the Forced Submission series, and as you can tell from both the series and book titles, what is desired is taken by force. There is a twist in the story, one that you won't find out until the very end, so I wasn't entirely sure if I should give any trigger warnings. However, because readers won't get to the twist until after some time, I'm going to say that you tread lightly and try to keep an open mind while reading Dante, Porter, and Sabrina's story. Dante meets Sabrina in a crowded bar and when she agrees to leave with him, he presses his advantage. Sabrina doesn't want to fall victim to the man's lecherous plans, and help arrives in the form of Porter...only he's not there to help her but Dante. This one has A LOT of sex in it, and again, it's sex of a dubious nature, but read the story to get to the twist.

The final book in this bundle is new and is entitled Halloween Treats. This one was the sweetest and what I would consider as the most romantic among the four stories. It has a recent college graduate turned elementary school teacher named Raven Treat and a thirty-year-old wealthy architect named Jack Bates. Raven has been noticing her student Scott's hot uncle for quite a while, but she doesn't believe she's the type of woman someone as good-looking as him would notice in return. But Jack has definitely taken notice since the beginning, and he's done biding his time. I thought having little Scott, Jack's nephew and Raven's student, as the matchmaker of sorts was a cute touch, and Raven and Jack's story was a great end to the bundle. Overall, this collection makes for a literary treat this Halloween, and I'm giving it five stars. ♥