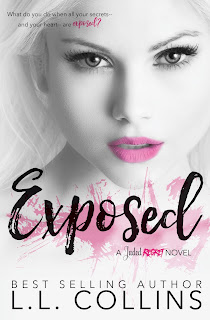 She thought I wasn't a threat.

That I didn't want her.

She found last night how wrong she was.

I wanted her more than I'd ever wanted anything in my life.Which scared me, because I thought it was quite possible Natalie Anderson could end me.

For the first time in my life, I felt like my heart was in the hands of someone else, and what she did with it could make or break me.


Two things: I can't believe we've reached the end of the fantastic series, and what an awesome final novel to cap it all off. L.L. Collins has given readers an angsty foursome of fiction that revolved around love, music, and some major emotional issues that the main characters of rock band Jaded Regret had to overcome or find a way to deal with in a healthier manner. The first three novels featured all the musicians in the group, and in the fourth and final one, it was time to turn the spotlight on the woman behind the scenes, thirty-year-old band manager Natalie Anderson. Fans and readers of the Jaded Regret series saw the early beginnings of what was happening between Nat and Kai Pierson, the new label representative, in Hartstrings and here in Exposed, we get to see just how much closer the two have become over several months. Is it really possible for you to fall for someone you've never met?

Natalie Anderson likes to remain in control, which is part of the reason why Jaded Regret has reached the level of success it's been enjoying as of late. On the outside, Natalie looks every bit the put-together, high-achieving woman that everyone around her believes her to be. However, she's keeping dark secrets from even those closest to her, and if those secrets ever came to light, she has no doubt that they'll the family that she's created with the rest of Jaded Regret will turn their backs on her in disgust and leave her behind just like everyone else has in the past. But beyond being a band manager, she's been her younger brother Beau's protector,  a position she took upon herself when she was fourteen after their father's suicide and the resulting abandonment of their mother. She takes care of everyone else, but who takes care of Natalie? Will she allow someone like Kai to take care of her?

Kai Pierson has worked hard to get to the position he's in now. Being promoted as No Limits Recordings' label representative for Jaded Regret is a dream come true. An unexpected but much welcome bonus comes in the form of Natalie Anderson, Jaded Regret's manager and the band's drummer's sister. Over the past few months, they've become close friends while communicating through calls, text messages, and emails. Talking to her has become part of his regular routine, and if he's honest with himself, he has a thing for her...and yet he has no idea what she looks like. He can tell she has a need to be in control and deflects any conversation that has to do with compliments, seeing them as platitudes whose sincerity she often questions. A trip to New York is the perfect opportunity for Kai and Natalie to explore their connection, but will he still want her when he learns Nat's secrets?

There were three things that stood out to me after I finished reading this book: Kai's love for Natalie is unconditional, Natalie's love for Beau is boundless, and the love the members of Jaded Regret have for one another is like no other. Family is a running theme in the series, especially since most of the original members of Jaded Regret haven't exactly had the most nurturing of childhoods. There's a part of the story tied to both Natalie and Beau, and while I personally wouldn't have done what Natalie did in order to protect Beau, I understood why she felt the need to do those things. Beau's reaction felt so real, and I think that even with all the heartache that it brought on, it's that very honesty that has made this series ender a special one. Jaded Regret is one of my favorite series of 2016 and though I'm sad to see it end, I look forward to new L.L. Collins fare. Five-plus stars for Exposed. ♥

Read my reviews for the Jaded Regret series: