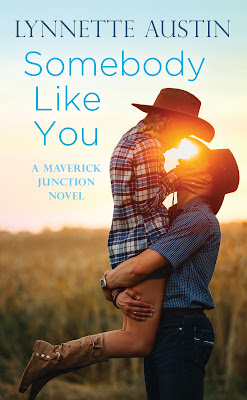 Somebody Like You
(Maverick Junction #1)
by Lynnette Austin
Mass Market Paperback Release Date: October 25, 2016
Forever Yours

About Somebody Like You
When a cowboy meets an heiress...

Cash Hardeman thinks he'll have all the time in the world to find the right woman . . . until he discovers he might lose the family ranch if he's not married by his thirtieth birthday. So when Boston beauty Annelise blows into town on her Harley, Cash can't help wondering if she's the sexy, leather-clad answer to all his problems.

Giving her bodyguards and the paparazzi the slip, heiress Annelise Montjoy comes to Maverick Junction on a mission to help her ailing grandfather. But keeping her identity hidden in the small Texas town is harder than she expected-especially around a tempting cowboy like Cash. He's the kind of man who makes her want to spill all her secrets. Soon Annelise starts to wonder if she's finally found the man who can love her for herself rather than her money. But will the secrets they both keep ruin their plans to ride off into the sunset together?

An Excerpt from Somebody Like You
“Annie, I’m the guy. The guy drives.”

She rolled her eyes. “That is so male!”

“It’s about control. You’re used to being in control.”

Hands on his hips, he thought about that. “Yeah, guess I am.”

“But you don’t know where we’re going,” he argued.

“So you’ll be my co-pilot. Direct me. How else am I going to learn my way around?”

He scowled, not at all comfortable with the way this was going down. “Tell you what. Why don’t we take the Caddy? Top’s down, and it’s an amazing night. It’ll be nice.”

She laughed, the sound curling itself in his belly. “Nice try, but uh-uh. No way. You talked me into a night bike ride, Cash, and that’s what I intend to have.”

“Oh, I have.” A quick grin lit her face. Then, mimicking his stance, she rested her hands on those curvy hips and tilted her head. “You’re not afraid to ride with me, are you?”

His eyes narrowed. “Afraid? Me? Not in this lifetime.”

After he stepped onto the stair landing, she closed and locked the door behind her. Then she headed down the stairs and hopped on her Harley. In the driver’s seat. He felt unbelievably silly as he slowly swung his leg and slid behind her. He sure as hell hoped nobody saw him sitting in the sissy seat. “Annie—”

“Hold on, big boy.” The bike rumbled to life. She spurted out of the drive so fast he barely had time to wrap his arms around her slender waist. He held himself stiffly as she navigated her way through the side streets, fuming that she didn’t trust him to drive her motorcycle. But then, as they headed out of town along the dark road, the night air wrapped around him, and he began to relax.  Not half-bad. Rather than hands on the controls, his arms were free to slide around Annie. His palms rested on her taut stomach, imagined the soft, warm skin beneath that butter-colored tank. He leaned into her, breathed in her purely feminine scent. Nuzzled her neck just below her helmet.

The bike wobbled and he pulled back, laughing. Throwing caution to the wind, they wound through narrow back roads as he directed her across his grandfather’s land to his little place by the lake. His sanctuary. He didn’t often take anyone there.

As it came into view, she slowed. “Oh, Cash. This is incredible.”

It was, he thought. The moon hung low, glimmered in the lake. The stately pines that rimmed the far side reflected in the smooth-as-glass dark water. And his house, with its cedar siding and high-pitched cedar-shingled roof, looked like every man’s dream. He’d worried when his mother had insisted on planting those daisies flanking the porch and walk. But their white heads glistened in the moonlight and actually added to the place’s charm.

She turned off her bike, and the two of them sat listening to the bullfrogs, the cicadas, the hoot of an owl off in the distance. His fingers itched to run along her moon-gilded arms and shoulders, and he found himself wishing he hadn’t suggested she change out of those little white shorts before hopping on the bike. His hands itched to tangle themselves in the mass of curls that tumbled free when she removed her helmet. Instead, he said, “Come on. Let me show you around.”

They left the helmets on the bike and walked across the yard to stand by the lake. Before they reached the water’s edge, Staubach came barreling toward them, whimpering and shaking with delight.

“I thought you were locked in the house, pal.” Cash snagged his collar, and the dog dropped to the ground.

Annie crouched beside him, and the dog wriggled loose from Cash and rolled onto his back. With a laugh, she gave in. “You like this, don’t you, you silly thing.”

“Nothing silly ’bout having a woman’s hands on you.”

Their eyes met in the pale light, and he had to remind himself to go slow. To resist the urge to join her on the grass. To fight the almost overwhelming need to put his own hands all over her.

“Up for another ride?” he asked impulsively, spotting the canoe he’d left tethered to his dock.

The dog, happy to have his person home, sat on his haunches, tail wagging. Cash helped her in, then settled himself on the center bench. This time he was driving, by God. His paddle dipped almost silently into the water as they glided toward the middle of the lake. Overhead, stars winked, and the moon scattered soft light. Not a single cloud drifted by to mar the sky’s obsidian perfection.

Totally relaxed, she leaned back, dipping her hand in the cool water, letting her fingers trail as they slipped smoothly along.

“Look,” she whispered. Fireflies winked and darted across the water. Cash angled the paddle back into the canoe and leaned forward. His arm slid around Annie and drew her close. She yipped when the boat rocked.

Still, she held on to the sides. He pried her fingers loose and put her hands on his arms.

Before she could protest, he lowered his mouth to hers. Annie’s grip tightened on his biceps. With a sigh, she leaned closer still, seeming unconcerned when the canoe listed, then righted itself. Her mouth opened, and she gave him everything. He changed the angle and deepened the kiss. Heart hammering in his chest, Cash finally broke the mind-staggering connection. “Annie—”

She shook her head, laid a finger over his lips. “Don’t say anything, Cash. Kiss me again.”

Lynnette Austin loves Starbucks, peppermint patties, and long rides with the top down and the music cranked up! One of the great things about writing is that daydreaming is not only permissible but encouraged. She grew up in Pennsylvania, moved to New York, then to Wyoming, and presently divides her time between Florida's beaches and Georgia's mountains. She's been a finalist in RWA's Golden Heart Contest, PASIC's Book of Your Heart Contest, and Georgia Romance Writers' Maggie Contest. Having grown up in a small town, that's where her heart takes her-to those quirky small towns where everybody knows everybody...and all their business, for better or worse.