Review: Somebody Like You by Lynnette Austin (Maverick Junction #1) 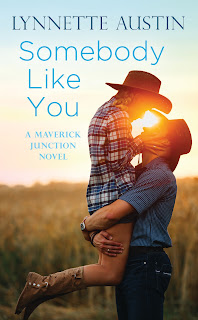 Note: This ebook was provided by Book Enthusiast Promotions in exchange for an honest review.

Somebody Like You is the Maverick Junction series starter and was originally published in December 2012 in trade paperback and ebook formats, and it's now being released in mass market paperback format. Written by Lynnette Austin, this first in a series is about a twenty-six-year-old, city-born and -bred heiress named Annelise Montjoy who hops on Harley and makes her way from Boston, Massachusetts to Maverick Junction, Texas. The rest of her family may think she's crazy, but she doesn't care what it'll take to help her ailing grandfather. When she meets rugged cowboy Cash Hardeman, she can't deny how appealing he is, and soon enough, she applies to be his ranch hand. He proves to be nothing at all like the men she's met before, not only with the way he is with her, but how he is with other people in town. But as drawn as they are to each other, they're both keeping big secrets: Annelise her family's wealth and the real reason she came to Maverick Junction, and Cash the stipulation in his grandfather's will to marry before he turns thirty or he loses the family ranch. Can Cash and his Annie have their happy ending?

This was my first Lynnette Austin read and I was impressed with how she was able to capture small town life while giving it a lighthearted yet touching story and a cast of characters that bring it all to life. With small town romances like this one, characters can either make or break the story, at least as far as I'm concerned. I look for that bit of quirkiness that makes the town stand out even if it may happen to be small in terms of size and remote compared to the hustle and bustle of the city. Annie and Cash clicked from the beginning, and I enjoyed the romance they had going, although I must say that to have kept such major secrets from one another required deception and it's difficult to really separate that sort of thing from the whole idea of trust and respect. The one that won my heart, though, was Staubach, Cash's dog, who I easily pictured in my head and it was obvious that the scene-stealer meant more to Cash than just his pet. Somebody Like You is a story about love--love for family and love for the one person who lays claim over your heart and knowing when to risk it all for those you love most. This gets four stars. ♥