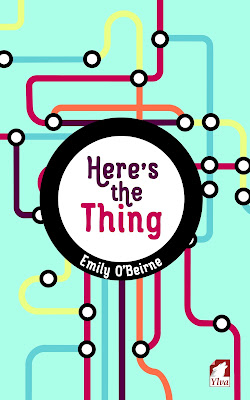 About Here's the Thing
It’s only for a year. That’s what sixteen-year-old Zel keeps telling herself after moving to Sydney for her dad’s work. She’ll just wait it out until she gets back to New York and Prim, her epic crush/best friend, and the unfinished subway project. Even if Prim hasn’t spoken to her since that day on Coney Island.

But Zel soon finds life in Sydney won’t let her hide. There’s her art teacher, who keeps forcing her to dig deeper. There’s the band of sweet, strange misfits her cousin has forced her to join for their Drama project on asylum seekers. And then there’s the curiosity that is the always-late Stella.

As she waits for Prim to explain her radio silence and she begins to forge new friendships, Zel feels strung between two worlds. Finally, she must figure out how to move on while leaving no one behind.

Read my five-plus-starred review of Here's the Thing.

Add Here's the Thing on Goodreads.

About Emily O'Beirne
From Melbourne, Australia, Emily O’Beirne works in academia, where she hates marking but loves working with her students. She also loves where she lives, but travels as much as possible, and tends to harbour crushes on cities more than on people.

A Guest Post from Emily O'Beirne
Moving Places
When I started writing Here’s the Thing, I knew there were a number of things that I wanted to be a part of Zel’s story. I wanted to capture the torture of the best friend crush. I wanted the adventure of the subway project. And I wanted to portray young people thinking about the plight of refugees in Australia. But I also knew I wanted to write about the shock and adjustment of changing places. And this is something my main character something Zel has gone through a few times in her short life, moving from Canberra to New York and then to Sydney over the space of a year or two.

I have always lived in Melbourne. And while I’ve travelled a lot, I’ve never gone through the experience of changing cities or even countries. But that doesn’t mean I haven’t experienced the kind of culture shock that comes with relocating.

See, we moved around a lot when I was a kid. I think at one point I counted about twelve houses before I was twelve. In that time, I also went to three different schools. The roughest move was the last one. I was nearly twelve. We were living in a colourful, old south-east neighbourhood where all kinds of people lived. My best friend on the street was an elderly Jewish woman who made me help plant her freesia bulbs for her. Every day after school I went around the corner to play with a family of five Lebanese siblings in the laneway at the back of their parents’ chicken shop, where they taught me to swear in Arabic and we ate herb-flavoured gum their dad gave us. On Sundays I always spent the afternoon with two Italian kids up the street. I waited for them to change out of their church clothes, and then we tore around the backyard until their mother forced us inside to eat sliced fruit, and taught me how to fold socks. My mother, sister and I shared an old Californian bungalow with my aunt, her husband and her new baby, and all our other aunts and uncles were always dropping by and you never knew who you’d find sleeping in the back sunroom out of them at any given day.

When I left for school camp, that neighbourhood was my home. When I returned, ten days later, we had moved into a house my mother had bought in one of those brand new housing estates that were helping the city of Melbourne spread like a melanoma in every possible direction. Here, in the great brown brick wash of the outer suburbs it felt like every single house contained white, lower-class middle families with 2.3 children, who’d just bought their own home. Every house was a variation of the same modern architecture, and the estate was so new that not a single tree had reached the top of the fence yet, leaving a bland, unbroken view of brick and wood.

This place came as a shock, even at my age. There were no shops, except for the occasional milk bar, nothing to do except watch the trees grow, and the adults all studiously ignored each other while their kids created packs and roamed the streets out of boredom, playing cricket, making trouble, or becoming fluent in outer Eastern bogan (Australian version of a redneck, sorta). And at home, there was suddenly just my mother, my sister and I, looking at each other suspiciously. The world had somehow shrunk.

Here I was, in my own city, but I felt like I’d moved to another world.  Luckily, I was only twelve. And like any twelve-year-old, I got used to the change quickly. There were three girls the same age as me living on my street, and we made immediate, firm friends. That kind of thing is easy when you’re eleven. But if I’d been sixteen, like Zel is in Here’s the Thing, I think it would have been a lot tougher. Because I think that the older you get, the harder it is to leave your friends behind, and to try and find your place in another social ecosystem. It’s harder to learnt the ropes of a new school, or to embed yourself in a new culture, whether it be one in the same city, like me, or another country, like Zel.

There are not so many books these days that deal with that adjustment of moving, whether it be across town, like mine, or to another country, like Zel. That’s why I wanted the story to show how kids cope with these changes. I mean, let’s face it, it’s generally awkward enough being a teenager, without your parents uprooting you and forcing you to find yourself all over again in a new place. But you do survive it, and maybe even grow to like it by the end.

Thank you to Emily O'Beirne for taking the time to put together this great guest post and to Ylva Publishing for the advanced reader copy of Here's the Thing. ♥