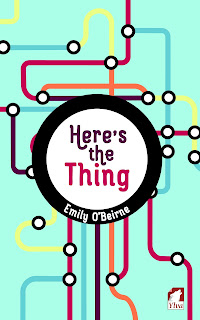 Note: This ARC was provided by Ylva Publishing in exchange for an honest review.

She's right, though. I guess it kind of did just happen. But that was only the realising part. When I look back on that night in the garden or that morning at the dance studio, when I think about my relentless curiosity about her, even when she could so stand-offish, I see how maybe those feelings were already there little.

But you know what? It's also one of those things in life that when it happens, it suddenly makes such perfect, total, amazing sense. So much so, you wonder how the hell you didn't think of it earlier. This is so different from what it was like with Prim. And that's because I can feel Stella feeling it too.

I admit it. I'm a bit pickier when it comes to LGBTQIA literature feature F/F stories than I am M/M ones. I've never really taken the time to analyze why. It just popped in my head when I sat down to start writing this review. I have quite a few favorite and go-to M/M romance authors, but there are only two names that are on my list as far as F/F romance authors are concerned, and one of them is Emily O'Beirne. There's a consistency when it comes to the quality of her writing, and she's shown in the currently four novels that have been published that she, indeed, has a gift that makes her storytelling feel as if you really are sitting with the main character and listening to their account of what's happened in their life. If you compare the four releases, though, you'll see that they're markedly different, shifting in theme while still maintaining that young adult and new adult age group her characters are in but not limiting her audience to those groups alone. Her latest work, Here's the Thing, is a coming-of-age story and it's told as only O'Beirne can.

Sixteen-year-old Zelda didn't want to leave New York or her best friend Prim, but her parents have promised the move to Sydney isn't permanent. Just one year and Zel can return to the life she's left behind in New York, and more importantly, return to Prim's side. All she wants to do is keep her head down and get through each day, bringing her closer to the end of her year-long sentence. She has no intention of going out of her way to enjoy Sydney or form any lifelong ties with those outside of her relatives. But that's easier said than done, especially when her art teacher seems to take a special interest in her, wanting her to be more introspective. Then there are the other Drama students who may be misfits but somehow, she fits in with them. But the one who piques her interest the most is Stella, the girl who's captured Zel's attention. Zel still misses Prim, but with silence coming from Prim's end, Zel is in limbo. She had a life back in New York, but she's starting to realize that she's surprisingly creating as good a life in Sydney too...

You don't have to be a teenager to be able to relate to and empathize with someone like Zel. I was a teenager once (looong ago...okay, not like a century ago, but more like a couple of decades), and change isn't just a staple in a teen's life but it's all about transitioning and evolving from being a kid who does whatever they want, to being just a year or two closer to adulthood and learning that change is inevitable and it becomes a matter of learning to adjust and making the most of whatever new circumstances come your way or to mope about it. In Zel's case, the move from New York to Sydney wasn't one she would have chosen for herself, and being a minor, she had no choice but to go where her parents decided they were all headed. When she allowed herself to be more open to the possibilities being in Sydney presented. That's the thing: life gives you possibilities; you just have to be willing to open your eyes and recognize them and see that maybe change isn't so bad after all. In fact, in can be amazing. Five-plus stars for Here's the Thing. ♥