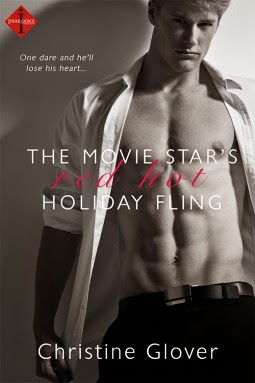 The Movie Star's Red Hot Holiday Fling by Christine Glover is a prequel novella in the Sweetbriar Springs series and is set several years prior to the events in book one. Its release comes months after that of the first book and while I read both books in the order of release, they can be read out of order. Actually, I think it would be better if you read this novella before reading book one, The Maverick's Red Hot Reunion, for the sake of continuity and the series timeline. But that's just a suggestion on my part. ^.^

Jessie Sullivan is a former marine who returns home after an IED explosion that nearly cost her a leg, badly injured a couple of members of her team, and ended the life of their team leader. She's living with her injuries but is even more burdened by the guilt she feels over the explosion. She's pushed away her family and friends and wants to simply refocus her energies on preparing herself for what she knows will be a grueling physical examination when she applies for the fire department. What she isn't prepared for is sharing her family's Sweetbriar Springs Resort's gym with actor Blake Johnston.

Blake Johnston has worked hard to make a better life for himself and his sister and while being a world famous actor has definitely had its perks, he's ready to move forward with his career, hoping that a screenplay he's working on will be accepted by the studio and give him the opportunity to direct. When he meets Jessie Sullivan, he's taken by both her beauty and bravery. He offers to help her prepare for the fire department's physical but secretly decides to take the opportunity to get to know Jessie better in order to gain an insider's perspective that he can use on his self-penned script.

Jessie and Blake are both attracted to each other but Jessie isn't sure she's the kind of woman Blake would want to be with and Blake feels Jessie deserves better. However, when Jessie offers a no-strings-attached fling over the holidays, Blake finds it difficult to refuse. In the short amount of time they're together, they can't avoid developing deeper feelings for each other, quietly moving from being friends to something more. However, when Blake's secret comes to light, a secret he was waiting for the right time to share with Jessie, she's left wondering if he simply used her and he's left blaming his own insecurities.

The Movie Star's Red Hot Holiday Fling is fast-paced and the lead characters each have enough of a back story to make them interesting and likable. I liked that Jessie wasn't some simple girl who was swept away by a movie star and that Blake wasn't some pompous celebrity who lived a life of privilege. These two had dimension to them, making them different from the usual cookie-cutter characters in similar stories of the regular girl and the movie star guy. If you've read book one, you'll be able to see how their lives have fared years later, but my personal preference would be for my fellow bookaholics to read this novella, which I'm giving four stars to, first. ♥