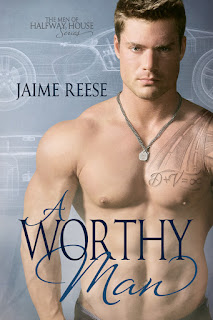 
Drayton might not be good at reading people, but he knew some relationships ebbed and flowed with good times and bad. His relationship with Vann had always flowed smoothly and, because they were together, always emerged much stronger from whatever life threw their way.

Their formula had been inked and etched. He and Vann, two constants together, equating to infinity. Drayton wanted the life together they had been denied. And he’d do everything in his power to make sure that would finally happen.

If you're familiar with my reviews, you'll know that I make it a point, whenever humanly possible, to read books in a series in order. I just believe it heightens my overall reading experience and gives me a better appreciation for whichever book is the latest release. Well, with A Worthy Man, the fifth and newest novel in the Men of Halfway House series, I wasn't able to read the first four books, although I was planning to do so but offline life got away from me and the one book I had to make sure I read in time for my scheduled blog tour stop was book five. However, may I point out that even without having read the previous novels and with just a very basic knowledge regarding what the series was about--an actual halfway house for men formerly incarcerated in order for them to assimilate and acclimate before fully integrating into the world beyond prison--I was able to fall in love with the story of two men who had a love so true and strong that not even a decade apart changed that love. However, ten years is a long time and while that love may not have ever changed, Dray Delereux and Vann Shaw did, irrevocably.

Ten years into his life sentence for killing a man, thirty-one-year-old Vannguard Shaw is informed that he's been granted parole. He wants nothing more than to wrap his arms the one person he's ever loved--and the only one who's ever loved him--but Vann isn't sure if thirty-four-year-old Drayton Delereux has found someone else. He may have religiously sent letters to Vann each and every week, but Dray deserved to have a man he could be proud of, someone who wouldn't bring him shame by being a convicted criminal. Dray has indeed moved forward, but the life he's created is one that he's willing to share with one other person--Vann. Even though Vann is supposed to spend a pre-established amount of time at the Halfway House, Dray is counting the weeks before Vann is truly free. However, Vann doesn't feel free at all. A part of him is still trapped within the four walls of his cell, in the very prison that changed him forever. But Dray knows the old Vann lingers within this new, hesitant, and wary one. They had seven years together and ten years apart. Can Dray show Vann all their years onward will be the best ones yet?

Goodness, how this story and these two men took my heart and refused to let go from start to finish. Vann and Dray's tale of love, desperation, and hope was in no way an easy read, but I was in it for the long haul, just like these two guys were with each other. Vann has never really considered himself as absolutely worthy of someone like Dray, but he so wanted to be. On the other hand, Dray spent their ten years apart making sure that while he was missing Vann, his separation was worthwhile, becoming the kind of man that Vann always believed he could be in order to have a life that they could both share once Vann was released. And that's one of the things I loved most--that Dray never lost hope that Vann would be free and that their love was strong enough to withstand anything and everything thrown their way. Their story could have ended at one point in the story and all would have been well, but I'm glad Jaime Reese took it further, making this an even better read. Those first four books? They're on my to-be-read list because if they're as good as A Worthy Man, they'll be worth my time. Five-plus stars. ♥

Purchase A Worthy Man on Amazon.