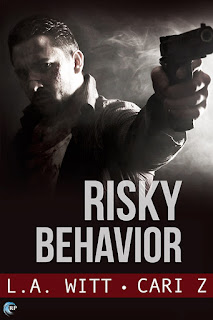 “Let me ask you this.” He rested a hand on the bedrail beside me. “If this hadn’t been a factor, would you have walked away last night?”

Not a chance. And neither of us would be walking at all today.

“Well, then . . .” A weird smile played at his lips, and when he leaned over me, he murmured, “You’ll have to try harder than that to get rid of me.”

And then he kissed me.

Two of my favorite authors joining forces for the greater good--that being coming up with not just one book but an actual series (SQUEEE!) for their fans and readers to go ga-ga over? YES, PLEASE! From the moment I found out that L.A. Witt and Cari Z were working together, I just knew it was going to be a book worth reading and damn it, I was right! Risky Behavior, the first in their M/M romantic suspense series, Bad Behavior, is gritty and raw and filled with more than one kind of tension. If the rest of the series, which I am praying to God isn't just limited to two, is as good as this series starter, then this could seriously begin vying for the position of one of my all-time favorites.

Forty-something Andreas Ruffner is a twenty-year veteran detective and he's damn good at his job. He isn't, however, the most likable guy in his precinct. With rumors of being a dirty cop swirling about--rumors Andreas couldn't care less about--internal affairs and his captain keep saddling him with partner after partner, probably hoping they'll finally have something to pin on him. Andreas sole focus right now is on the case he's been working on for years. Trust isn't something that he gives freely or fully, so when he meets his latest partner, rookie detective Darren Corliss, he's immediately wary, but Darren isn't someone who's easily cowed by Andreas's surly demeanor.

It's pretty clear that his new partner doesn't like him very much, but twenty-eight-year-old Darren Corliss didn't spend his years as a beat cop and study all those months to become a detective just to be scared off by Andreas Ruffner. The man is gruff and doesn't seem to think to highly of him, but then that may have a lot to do with Andreas immediately knowing about the IA wanting Darren to rat him out. He isn't entirely sure why, but Darren finds himself wanting his new partner's respect...and attention, in a not-so-professional way. But there could be more than just their jobs and their case that may put a stop to the pursuit of a personal connection between them.

Gah! I loved, loved, LOVED this book! There's one particular M/M romantic action suspense series that holds the highest spot on my list of all-time favorite (regardless of genre), and this new co-written book by L.A. Witt and Cari Z gave me some familiar feels that I've rarely felt since I first met two FBI special agents named Ty Grady and Zane Garrett. Let me begin with the chemistry between Andreas and Darren, which was electric and palpable. I liked that they had to earn each other's trust and respect. Yeah, they had already noticed each other and maybe their were stirrings of attraction, but they had to build some sort of foundation to tolerate one another's presence first.

These two were forced to confront their respective issues, and these were not your run-of-the-mill issues either. Darren's worries regarding his brother and how his mom and stepfather were trying their best to make sure the elder Corliss brother was safe had my heart squeezing in empathy. Then there was Andreas and his particular situation, which I honestly can't recall ever having encountered in any of my past reads. I liked how Andreas offered his support to Darren without preamble and how Darren took Andreas's revelation in stride. These two were far from boring, and I must confess that I was in serious adoration mode by the time I'd finished reading this.

Now, as far as the suspense part was concerned, this gets high marks as well. Every revelation made it clear how damn complicated the case was, and then everything became far more personal than even Andreas was anticipating. There was mystery and action and all of these combined heightened the entertainment value of this book even further. Just so you know, there is no cliffhanger to speak of, even though the second book still involves the same couple. The case is resolved more than satisfactorily, but I'm sure Andreas and Darren will be kept on their toes, professionally and personally, and I'm so looking forward to the ride. Five-plus stars for Risky Behavior. ♥